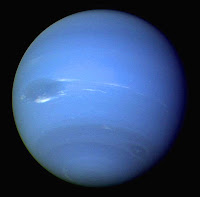 May 29--12:30am EDT (28th rest of time zones)
Every year Neptune retrogrades for about five months. We can't get too worked up by the action because lets face it, if it is going backwards for nearly half the year every year--we just are kind of used to it.
Having said that, the actual day of the event might present something for the world to watch. Although, I can't remember right now what went on in the news on that date last year when it turned retrograde BUT what I can say is that the Neptune retros for the last few years have taken place in May and then the Direct dates comes up in late October or November.
Now---ponder this....last year when it retrograded at the end of May (around Memorial Day) and came back up for air November 2...the world was not the same. It was a whole new world by November 2nd.
The Stock Market crashed and burned September/October 2008---the last month of the retrograded neptune. Of course, analysts can tell you now that there were creakin' and crackin' signs during the summer if people were willing to watch. Sure, maybe? But who was looking we were all lost in our neptune retro world... playing the game, "Hey see no evil --feel no evil."
But what might come up for us to look at this summer? One thing I saw in today's news that kind of rocked my little bones was the news that 12 percent of all mortgages are underwater and a large percentage of those mortgages are not subprime. Meaning these were people who took reasonable loans and had good credit...and they are underwater.
I will be interested to see what other things are reported tomorrow on the last friday of the month and the day that Neptune retros.
And where will we be November 4 when it turns direct?
Remember all of this is taking place in the sign Aquarius which is groups and associations. What group do we fall within society? Are we poor? Are we rich? Are we workers? Are we unemployed? Are we working at job that moves our soul? Are we just doing our time and collecting a check because we don't have anything better? Are we volunteers at our kids schools? Why not? Do we wish we could do more work like that? Do we wish we could be more a part of society in a more constructive way?
and drumbeat... are you inspired by community? And if the answer is NO..then why the 'eff not? I'm not saying it to be provocative I am saying it really in a 'Neptune in Aquarius' (last 4 degrees way). Remember it will only be here until 2011.....so we don't have a lot of time to figure this out...
These are some of the things we should be pondering this summer. Perhaps as we figure out why---- whatever world we land upon in Fall when November turns direct will not be as shocking.
perhaps?
Posted by Tracy at 10:59 AM