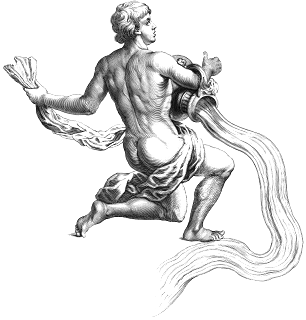 For those of you born under Aquarius you should be getting a treat this year. Something new and exciting (which always rings your bell) is coming your way. This Spring, your Ruling Planet Uranus is moving out of Pisces where it has been since 2003 and into something QUITE different--Aries. Holy Moly, get out of the way, the teacher is giving you a permission slip to go out into the hall and run like hell!!!! Uranus makes the move in late May and spends a lot of summer in Aries where you will be itching to do something different, to make moves in your life that give you more freedom and or take care of you. In late August Uranus will retrograde back in Pisces and you'll feel a bit calmer, perhaps rethinking some of your actions since May. Not necessarily regret but just 'rethinking it'. But then in 2011 Uranus will go right back in Aries and everything you did back in May-July this year will make sense. Uranus will remain in Aries until 2019. So, you have a lot of time to work out that independent energy Aries sends your way.

As always, we still have Neptune in Aquarius and those born in late Aquarius ( Feb 13-Feb 17) are feeling woozy, dreamy and fuzzy a lot of the year. No one likes to talk about how stubborn you guys are but you Aquarius can be pit bulls. Sure your independence and stick-to- itness has gotten you far in the world but it has also effed things up for you. And in the quiet of the night you think about that part of your 'dogma'. Now those of you born in this window will have Neptune dissolving some of those opinions. It does not mean you lose your center but frankly it is dissolving the part of you that is so stuck you are rusty. This is why you will be dreamy and unsure of stuff. That is a great place to start as you figure out what is next. If you are not sure how to handle this it starts with, "I know I always did, said, ate, went, played, visited, etc _______ (fill in the blank) but I dunno, I'm not so sure I want it any more."

The beginning of the year will bring a lot of energy as Mars is in your opposite of your sign stirring up some angst and drama. You could be very busy and you could be short fused but by June it will dissipate.
Posted by Tracy at 8:43 PM