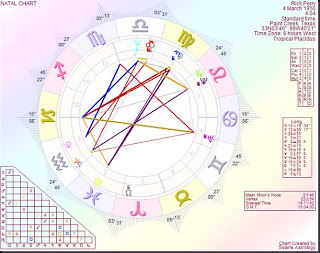 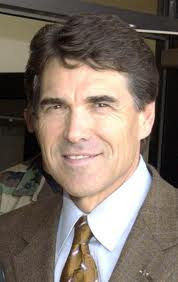 Of course, Michelle Bachman's straw poll victory in Iowa was a bit eclipsed by Governor Rick Perry's announcement that he is now running for President.

Personally, had I been on Perry's camp I might have announced him before the Mercury retrograde or after the retrograde. And if I was in charge of it, I would have done similiarly for the straw poll date. However, I didn't get that call.

Apparently, there is no time of birth available and in this case it does impact his Moon which could either be in Virgo or Libra. When a time of birth is unknown, an astrologer will take a look at important events in the native's life and try to determine what makes most sense in terms of houses and ascendent.

I am sure we will learn more about Governor Perry as the months progress and there will be more and more speculation on his birth chart. Maybe we'll even get lucky and someone will find a birth time!

But in the meantime I found a speculative analysis by Paul at SolarisAstrology which he posted on Monday.

This is an interesting read, you can read the whole article HERE and here is a snippet.


Born in a rural cotton farm community where he lived and worked on the land with his family. The house of home and upbringing suggest Taurus on the cusp or Venus in the 4th house keenly associated with farming and the land?

As a boy we know he was an Eagle scout. Scouting is very much a Sagittarian pursuit so I would expect this sign on the cusp of the 11th house of groups and associations or Jupiter tenanted here in the 11th?

At school he studied animal science where he received a bachelors degree. Now on the 4th March 1950, Uranus associated with scientific studies was in emotional Cancer, here we have the aspect for compassionate science. The Virgo 6th house is the house of health and also of animals in general, surely Uranus must be located here?

We know that Rick was trained to be a pilot and flew military jets while serving in the US Air Force in the Middle East and in Europe until 1977, he also very nearly became a commercial pilot. Mars is the planet signifying the military, and Mars in May 1950 was in social Libra, he was a military pilot turned social one. Mars surely has to be placed in the 9th house of international affairs and of travel. Either that, or we should find Aries on the cusp of the 9th house or possibly Scorpio? Bringing Mars into the 9th house takes Scorpio onto the cusp of the Midheaven, killing two birds with one stone.

We know that Rick is an evangelical Christian, so one of the faith indicators on the chart Jupiter, Neptune, Sagittarius or Pisces should be prominent. Jupiter is in Aquarius and Neptune in Libra, very social but not naturally religious positions. The Sun is in spiritual Pisces, but for with one with such strong faith as Rick, I would expect to find a bit more astrologically to back this position up. We therefore have 4 options. Either Pisces or Sagittarius on the cusp of the 4th house, indicating religion at home which would take away from the farming upbringing; I discount this as Venus is in Aquarius, or Neptune or Jupiter in the 9th house of faith. Neptune is close to Mars in the chart and bringing both into the 9th house confirms the faith aspect as well as the military service abroad.