Debt Ceiling to hit in March.... 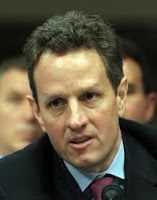 This morning I saw this on the news:


NEW YORK (CNNMoney) -- Treasury Secretary Tim Geithner on Thursday urged lawmakers to act soon to increase the debt ceiling, warning that failure to do so would be disastrous for the economy and for Americans.

In a letter to congressional leaders, Geithner said Treasury estimates that U.S. borrowing needs could push the amount of debt past the legal borrowing limit of $14.294 trillion sometime between March 31 and May 16.


I have no intention of following this topic like an ambulance but I am just humored that one day we can have Megamillion Lottery winners and the next moment Treasure Secretary announced we're broke as of March. As previously mentioned here, the congress will have to raise the debt ceiling, which political pundits indicate will probably pass despite newly elected officials who said they would never vote for it. And no one on this side of the computer is surprised this is all going down in Capricorn lunar cycle.
Posted by Tracy at 9:04 AM