Curious Antiquities are showing up 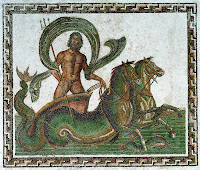 I will be the first to tell you I can't exactly call the astrology on this one. Because of the theme of the findings I'm leaning towards Neptune in Aquarius. Although, we have been experiencing that transit for years. But perhaps it is the combination of Pluto in Capricorn while Neptune is in Aquarius---??? I'm not sure but the things that have been found of late are down right interesting.

Earlier this month an 18th century ship was found at Ground Zero. Yesterday they began dismantling it from the site.

Plank by plank, archeologists on Monday began the delicate process of dismantling a section of an 18th century ship that was found buried across the street from the World Trade Center site.

Each plank will be freeze-dried so that the fragmentary hull can eventually be reassembled and put on display, said Nichole Doub, head conservator for the Maryland Archeological Conservation Laboratory.

The 32-foot section of the nameless vessel was found earlier this month as workers were excavating for the rebuilt World Trade Center's parking garage.

The archeologists who carefully began taking it apart said they were thrilled by the historic find.

"This is my first ship. I've been doing archeology in New York City for almost 30 years," said Diane Dallal, director of archeology for AKRF, an environmental, engineering and planning consulting firm that is working on the project.

The section of the ship lay bathed in water and shielded from the sun by a tarp strung up on poles. Doub said the timber has to be kept wet or it will warp.

The whole article about Ground Zero Ship is HERE

Of course, Neptune rules Ships so that feels about right.

Then we have another favorite Neptune pastime---Booze.

Earlier this year a crate of scotch was found in the Antartica, underneath shed belonging to Ernest Shakelton from his famous 1908 search for the south pole.

A crate of Scotch whisky that has been frozen in Antarctic ice for more than a century is being thawed by museum officials in New Zealand.

The crate, and four others, were found earlier this year beneath the floor of a hut built by explorer Sir Ernest Shackleton during his 1908 expedition.

Canterbury Museum official Lizzie Meek explained how the whisky was being thawed, while Nigel Watson from the Antarctic Heritage Trust said it might be possible to recreate the whisky from the frozen samples.

After it slowly thaws it will ideally be ready for 'sampling'.

and then there is the world's oldest drinkable champagne that was found by Swedish Divers in the Baltic Sea. The bottle are from the 1780's pre French Revolution and probably on route to the Czar.

Divers have discovered what is thought to be the world’s oldest drinkable champagne in a shipwreck in the Baltic Sea, one of the finders said yesterday. They tasted the one bottle they’ve brought up so far before reaching shore.

Diving instructor Christian Ekstrom said the bottles are believed to be from the 1780s and probably were part of a cargo destined for Russia.

“We brought up the bottle to be able to establish how old the wreck was,’’ he said. “We didn’t know it would be champagne.’’

Ekstrom said the divers were overjoyed when they popped the cork on their boat after hauling the bubbly from a depth of 200 feet. “It tasted fantastic. It was a very sweet champagne, with a tobacco taste and oak,’’ he said


One bottle was uncorked and declared delish. Sure, nothing too god for the Czar.

ETA: Add another to the list. The HMS Investigator, a British ship lost in the artic ice for the last 150 years was just found.
honest to goodness you can't make this stuff up!
Posted by Tracy at 8:31 AM