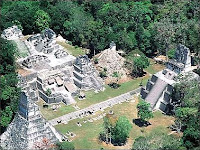 U.S. and Guatemalan archaeologists have found an unusually well-preserved burial chamber that they believe is the tomb of the founder of a Maya dynasty, a find that promises new information about the empire's formative period.

Archaeologist Stephen Houston of Brown University said the tomb was so tightly sealed that the team found remains of textiles, wood carvings and other organic objects that normally don't last in the humid tropics. Even after 1,600 years, the smell of decay was still present when the team broke through the walls of the tomb, Houston said.


As interesting as this story is and I do find it curious. I was horrified to read that six infants were entombed with him. Listen, even if the Mayans had a lot figured out celestially, they were so misguided with their human sacrifices that I basically don't give a shit about their calendar ending on 12/21/2012.
Posted by Tracy at 8:23 AM