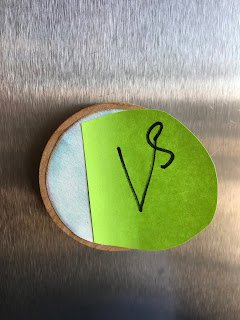 Capricorn lunar eclipse on a fridge.

Let’s all remind ourselves as to what is exactly an eclipse.  Technically an eclipse is when the shadow of Earth is cast upon the moon (Lunar) or the moon gets between the Earth and blocks the sun (Solar).  If it covers it completly it is a total eclipse if it gets some of it, it is a partial eclipse.

Eclipse patterns are in19 year cycles.   This lunar partial eclipse is at 24 degrees of Capricorn and the last time we had eclipses in Cap & Cancer was 2000 & 2001. And specifically it was at this exact same degree on July 16, 2000.  You may want to recall what was going on in your life at that time and see if the same themes are coming up now.  Obviously, 9/11 took place in 2001 Cancer Capricorn eclipse cycle, which set off a course of events that still impact us today.   However, it is important to note there were other astrological events also going on besides the eclipse.

This period of the Cancer & Capricorn eclipses points to a teeter totter experience of worldly matters versus home and family.    Practicality vs emotions.    Sensibility, responsibility and ‘Dad’ vs  feelings, intuition and ‘Mom’.   Showing up at job vs showing up in a kitchen.  Being an adult vs being a child.  And knowing which is more important---both are critical but with eclipses it is like when someone walks into a room and turns the lights on or off –everyone is put on alert.  The same with a lobby of a theater, when the lights go on and off everyone knows a new act is about to begin.   We have already had the lights go on last summer and this last January and will have it continue through next June.   Can you identify what acts in your life have started to wrap?  Or what new shifts did you make that combine your intuition and your pragmatic self?   What have you launched?  Some people have already changed homes or jobs, which is typical with Cancer Capricorn eclipses.   By the way, these tugs in different directions do not have to happen exactly on the day of the eclipse but can start to emerge around the dates.   Here are the dates for the Capricorn Cancer eclipses:
Solar Eclipse July 12, 2018 – 20 degrees Cancer
Solar Eclipse Jan 21, 2019 – 15 degrees Capricorn
Solar Eclipse July 2, 2019 – 10 degrees Cancer
Lunar Eclipse July 16, 2019  24 degree Capricorn (Current)
Solar Eclipse Dec 26, 2019 – 0 degrees Capricorn
Lunar Eclipse Jan 10, 2020 – 20 degree Cancer
Solar Eclipse June 21, 2020 -  0 degrees  Cancer

If this full moon chart had no other planet in the mix it would still be punchy since it is an eclipse.  But there is more to this chart and it would be astrological malpractice to NOT bring up Saturn and Pluto on this eclipse.  First of all, in the chart, the Moon has cozied up to Pluto and not too far away is Saturn watching over his Capricorn kingdom.    Both planets are addressing power.  The power that is in being responsible and proficient (Saturn) and the power there is in evolution.  (Pluto).    Saturn takes things that are frivolous and throws it away so that we can focus on what is important.   Pluto lets something die so it can be reborn and we can be new again.  Obviously both planets speak of letting go.

As you can see these are not light and airy planets and having them in the mix on this eclipse signals it’s a time to get rid of the corrupt (Capricorn’s downside) and immaturity (Cancer’s downside).   Astrologers in the future will nod their heads and mutter “Lunar eclipse 2019” when they see stories from the news about Jeffrey Epstein and child rape cases around this eclipse.   It’s all there for an astrologer.    But back to the personal, many people be feeling, ‘let’s get on with it’ or  “Time to cut bait or fish.”   The eclipse pushes back on dithering.    Because Saturn is retrograde along with Mercury we may not actualize the ‘getting on with it’ but it has to start first with the emotion and that is Cancer’s message.  Feel it and begin to act upon it.

In addition, some of the issues or endings that come up with this eclipse may have an important connection to next year’s great conjunction of Saturn and Pluto on Jan 12, 2020 at 22 Capricorn.   Here we go with Saturn and Pluto again!

This aspect is one of the more important aspects for the 21stcentury and signals a new change.  The last Saturn Pluto conjunction started in 1982/1983 and curiously that cycle hit its mid spot in June 2000 around the last time of the Cancer eclipse.   There is no law in the astrological universe that would tie eclipses to Saturn & Pluto but it is curious that the last time we were in these Cap/Cancer eclipses was the mid point of the last Saturn & Pluto cycle.  And now we are on the eve of the next Saturn Pluto cycle and we are once again in Cancer Capricorn eclipses where we process our emotions and responsible natures to figure out what is important and get focused on working towards new goals.     For the record the next time Saturn gets on top of Pluto will be 2053 and then 2086.   Like I said, this aspect is important in this century.    You can read more about Saturn and Pluto

We would be smart to watch what our intuition tells us or any adjustments we find ourselves making during this eclipse and know that it may be key to the new cycle beginning in January.

Although the eclipse lasts only a few minutes the full phase is a three day process wrapping up July 20 4:32pm PDT.   It’s may not be easy work in front of us but we can do it.  On this eclipse, tap your intuition and get working!