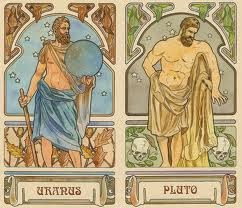 As I have indicated many times on this site we are experiencing monumental shifts and tension.    Back on Virgo New Moon I went over a lot of the important dates going back to 2008 when Uranus moved into Aquarius.   You can find the whole list of dates HERE.

But right now the focused dates that are on our watch are the exact dates of Uranus/Pluto square.

What kind of changes have happened to your life since June 2012?

As you can see we are right now approached Square #4 on Friday (November 1).    How is the tension in your world?  Where do you see or feel changes in effect or need to be made?   If we look at the big world we saw a Government shutdown and the roll out of Obamacare  which as we can all agree both screamed SQUARE!

And of course spying is ruled by Pluto  and I suspect astrological historians will tie these aspects to Edward Snowden.  If you note aspect #3 took place on May 20.  On that exact date Edward Snowden flew to Hong Kong having made contact with the Washington
Post on May 16 which cracked open a firestorm.  Now, as we approach Aspect #4 his disclosures have implicated the US in spying on German chancellor AngelaMerkel’s cell phone which is something that has been going on since 2002.

But note we learn it now.

Going back to the fourth aspect this Friday, it is part of an additional wave of tension.  Between August 7, 2013 and April 20, 2014 Jupiter in Cancer is running roughshod over Pluto and Uranus creating a T square which adds more fuel to the fire.   In short, we are in it.

There is a cosmic tone happening right now, and it will continue through 2015. Many people are questioning whether their life *as it is* is truly sustainable. Individual circumstances vary but the feelings of unhappiness, despair are common and at core there is a deep inner knowing that what we have been doing for the last XX years is not supporting the future person we want to become. This is not only true for some of us individually, but as we are seeing, it is true for us collectively as a whole. Systems in our government are broken,  false starts leading to perpetual impasse.  Go to  LINK for rest of post.

Over at ABOUT there is a decent write up.

Look Alive!
What an epic time! It demands our full attention now and in the years ahead. There are unpredictable forces at work here. Some might claim to see how it'll all shape up, but it's being made up, as we go along. That's the point -- something wholly new and unprecedented is emerging.   Go to LINK for rest of post.

And of course Robert Wilkinson has a thorough write up.

These next few years are neither the first nor last time that Uranus afflicts Pluto. Let's take a look at what this square could mean and how it could manifest.
I last gave this to you a couple of years ago. This article deals specifically with how past Uranus square Pluto periods relate to the revolutionary conditions set into motion when they conjunct. The waxing or lower square represents a point in any cycle of “first emergence” of whatever was “born” at the conjunction. It is a point of challenge, of externalization, of “turning the corner” or “putting the brakes on” something that’s showing up.
These powerful planets, when in conjunction, square or opposition, create a need to tread very carefully, given the energies challenging each other through these dynamic and relatively frictional aspects. When the Transpersonal Individualizer grinds up against the Transpersonal Transformer, we have two extraordinarily powerful spiritual forces working at cross currents to each other.
As I’ve written in past articles, we’re all learning to manage the “out of control” energies of Uranus square Pluto…. Welcome to the 21st century of upheaval, transformation, and titanic collisions between a new world being born and an old age that’s digging in even as it’s dying.
That square represents the ongoing revolution of our times, with innovations and pioneering energies in conflict with restrictive and controlling power structures. We’ll be dealing with this for a few years, and it promises to make this year and next very “electric and eclectic,

Coming up this week

Focus on:
How is you creativity in balance with your life?  What actions are you taking that activate your creative, passionate and joyful side?   Where is love in your life and how is it in balance?