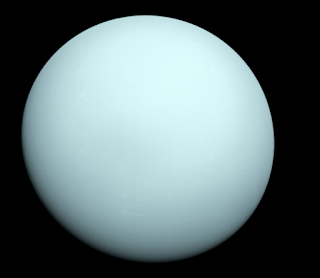 Uranus masquerading as a cue ball.

Uranus begins its annual retrograde cycle.  Uranus likes to change everything up.  It is abrupt and can pull a fast one on everyone.    Taurus is the sign of everything rooted in practicality.  It is dirt. It is money.  It is values.  Taurus builds everything from the ground up.   Uranus disrupts and can tear everything down.

The last time Uranus was in Taurus was during the 1930s. It was extraordinary time of unending drought and extreme climate.    During almost the entire time Uranus was in Taurus we had the Dustbowl in the middle of the United States.   It caused great migrations of people who left farms in the central USA and headed to other parts of the nation.   I thought about that era when I saw on the news last month that the fires in California and Oregon sent ash three thousand miles away and clouded up the skies in Maine and New England.   In the 1930s dust blew across the nation and into Washington DC finally getting the attention of members of congress who had to wipe the dirt that once was the land of an Oklahoma farmer off their fresh pressed suits.  Only then did they start to write meaningful support to help the farmers.  It is worth noting that there was a mismanagement of soil in the 1890s – 1920s that was responsible for a lot of the Dust Bowl.

I anticipate we will see more climatic (and food supply) issues.   Stories of migration will be in the news and environmental injustices.    Personally, wherever you have Taurus in your chart it is getting your attention probably in weird (there’s that word again) ways.  Maybe money stuff.   Property stuff.   While it could feel rough during the bumps, there are new starts and new beginnings buried in the bumps.