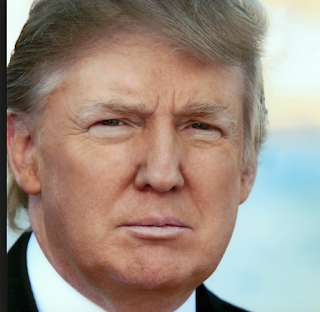 Donald J Trump is a Gemini with Moon in Sagittarius and Leo Rising.

For those who know astrology none of this is surprising.  The Tweets, the mercurial temperment, the catch phrases for his opponents all speak to the Gemini Sun.   Moving quickly, perhaps rushing too fast, shallowness and little patience especially on the edge of being bored --also Gemini.   But for people who are drawn to DJT they love the constant comments and find his candor refreshing and at at times funny.   Again, Gemini.   The Moon in Sagittarius is the big opinions, paints with a big brush, big rhetoric,  telling the truth as he sees it, all Moon in Sag.    Leo Rising is all about the doing things big, like a big big beautiful wall.   Cocky and ego run amock which I think even his fans can agree is evident, all Leo.  And of course the hair.  Leo.

Of course there are many people who have similiar placements.   Any Gemini born on a full moon around ten in the morning has Gemini Moon in Sag Leo Rising and yet they are all not like DJT.  Ah, no.

You have to go down deep and look at the whole chart of Donald J Trump. 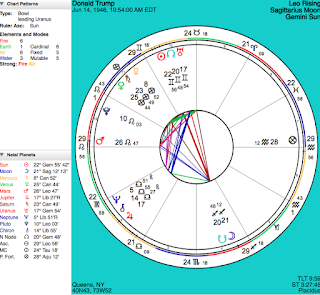 There is so much going on here that I will not go into all the details because it is could be overwhelming.  But what is worth mentioning is the Moon with south node on top of it and Sun & Uranus with North node on top of them.  In houses 4 and 10.    These configurations is destined (not a word I use often) of a man who would have a major public persona, especially with the Uranus placement.    The Mercury, Saturn & Venus in the eleventh house speak to his geniune need to be accepted by groups.   The insecurity is there (Saturn) but so is the love (Venus).  He has his fans and more to the point he really needs the fans to find inner love.

Pluto and Mars in the 12th house speak to someone who has wild nervous energy.  If he was a child right now there probably would be concern about ADHD.  But at the same time Pluto & Mars in the 12th house resonate with others.   People  see power (Pluto) in him.   Others of course see the bully another Pluto trait.  People who see the power see the man they want to be or want to have in their life.  There is a genuine magnetic charm with these two power players in the 12th house.  Many actors have Pluto or Mars in the 12th.

If Trump is all that he says he is or what people see in him is unclear.   The 12th house is the most hidden house in the zodiac so what is real we don't know.    It is the house of hidden insecurities.   And motivations that can not always be explained.  Not just by observerers but person with the 12th house planets doesn't know the motivations either.

It is also important to point out that Mars is not just in the 12th it is on Ascendent.   Mars is the warrior, he is like a fast red race car.  Having Mars on his Ascendent explains a lot of DJT  knee jerk behaviors and  his need to be always moving fast.  It is not an even keel planet to have on the Ascendent.     Mars is looking for an advisary in every meeting, phone call, lunch or casual conversation thus the thin skin.   He may have written the Art of the Deal, but the art of the argument gives Trump vitality.

Currently, transiting warrior Mars is about to do a very long slog and go after all these planets for the next six months.     For someone thin skinned, mercurial and opinionated with a large ego getting a transit from Mars is like fuel for a fire.  Mars will be driving over him and stirring up all his behaviors good and bad.   The question is what will he do?

Along with  warrior Mars there will be other planets activating various planets in DJT's chart both easy aspects and hard aspects.   Let's look ahead at the aspects hitting Trump.  I've written a little description as if he were a friend asking me to look at his chart.

May - November (Exact in September)   Uranus square Saturn. Conflicts both internal and external.   Need to ditch old patterns and replace with real structure this can cause a struggle because the desire is to dig in.   Finding sobriety while changes go around is difficult.

October:  Uranus sextile Sun, a boost from an unusual resource.  Faith offers a gift.  Spirituality and designated groups help.
October: Mars square Neptune:   Actions that cause confusion.  Actions that are based on confusion. What is desired may not come to fruition.
October:  Mars oppose Mercury.  Mouthy.  Sharp comments.  Ego high.  Communication very sharp.
October: Jupiter square Mercury.  Opinions out there big time.  Embolded with ideas and communication.   Ideas overiding realism.  Out over the skis.
October:  Jupiter conjunct Neptune.  Money and resources appears to widen.  Power from a new source appears to show up.   These bounties may be real but they may be viewed with rose colored glasses and will not live up to expectations.
October: Mars square Chiron.  Healing is hard.  Deep insecurities are pushed.  Bad habits come up and are processed.   Creativity and love feel threatened.   Trying to hang on to assets is difficult.
October:  Jupiter sextile Pluto.  Boost of confidence. Serious internal look at what works and what does not work. Making changes.
October: Mars square Jupiter.  Outside actions push on beliefs.  Over reacting and ego outbursts while processing new belief system  Dramatic and creative moves feel out of whack.  Actions don't seem to work.
October - November:  Mars opposition Saturn.  Feeling stuck and blocked.  Working through hurdles feels overwhelming.  Energy going forward feels like cold water is splashed on it.
October - November.  Mars trine MC.  Feeling vitality about position in the world.  Feeling like all things are going into place.
October - November:  Mars opposition Venus.  Conflicts with women.   Actions based on love can feel in conflict with groups of people.
November:  Uranus square Saturn.   Conflicts both internal and external.  Groups of people in conflict changes to go forward.   Challenged between actions that are outrageousness versus measured.
November - December:  Saturn in opposition to Uranus.   Restructioning, building up, starting from the ground up.  Freedom feels thwarted.

That is a crazy lot of aspects and most of them are harsh.   Together we will watch how GOP nominee DJT handles the pressure.

It is also worth looking at the official nominee chart of DJT which took place when Trump officially accepted the nomination on Thursday evening in Cleveland.     This chart speaks of the official candidate going forward.   Not just Donald Trump the person (which we can see from the above aspects) but the chart of the candidate. 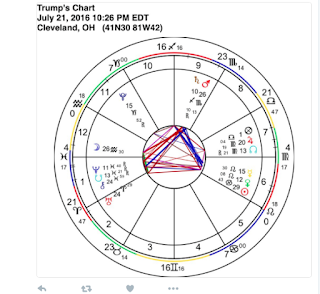 The Moon in Aquarius in the chart resonantes for a lot of america, especially since the USA chart has an Aquarius moon.  Many Americans see a friend in the GOP nominee.    However the Moon in 12th house squaring Mars in 9th is a friend who connects on a dystopic views or connects on a "We're a special group with our own ideals."   Sun trine Mars brings energy and enthusiasm.    Sun Square Uranus is chaotic and disruptive and ego misbehaviors.  Venus trines MC is loaded with charm and warmth and engaging.   Mercury trine MC, communication is strong and connects to many.   Pisces ascendent connects to people who feel dismissed.

After DNC I will put up a similiar inventory for HRC.