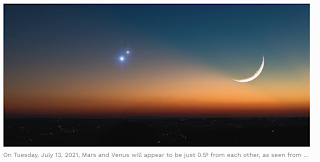 …Venus and Mars in Leo form a conjunction on July 13.   The last time these two planets were in conjunction in Leo was August of 2015.   We may feel an echo off that summer during this cycle.   This conjunction is part of three, the next two Venus/Mars conjunctions will be Feb 16 at 17 Capricorn and the final one will be on March 6 at Zero Aquarius.    On the basic, astrology 101, our two closest planets (from Earth), speak of love and values and receptivity (Venus) and war/action and aggressiveness (Mars).  Love and action come together.  In Leo this speaks to that which makes our heartbeat.  Leo is our creativity, art, passion, love, drama, play, joy and heart driven activity.    I could blow through this conjunction and give you a one liner that would be accurate, but I am going to stop down on this one a bit more because my gut (Cancer) is telling me to do it.  Next month on the Leo new moon I will echo some of this language but with Venus/Mars conjunction in Leo and the sextile to the Cancer New Moon, we need to start connecting to the Leo energy.

Do you know anyone in your life who has unfettered passion?  He or she has a drive and come hell or high water they do it?  I have a son who has a passion for airplanes no less than Richard Branson.  He takes endless trips to LAX to photograph this plane land, another plane take off, each special for reasons only known to him and his plane spotter friends. They gather on a hill talk with passion like they are seeing a plane for the first time and by the way, the are of all ages.   I also have a husband who loves running, swimming and biking.   The miles he covers in all three activities every week, would make the average person shake their head.   I, of course have my own passions, writing, researching, not just astrology but other topics.   I can go just as deep as the other members of our household.   I know from personal experience that having a thing and running with it keeps the heart going.  My friends use to laugh when I got super excited by the arrival of a death certificate when I was deep in geneaology. Being excited about something taps a vitality in us.     Are you tapping your own interest?  Where is your thing?  Are you running with it?   Have your ‘things’ been put on the back burner?  Is it time to find a new thing?   Or are you telling yourself that your thing is stupid?  A waste of time?  Or  that you aren’t that good/knowledgeable/not enough to run with the thing?  Did you know the word amateur comes from the word amore ?  Meaning to  do something out of love.

Now is the time to find and spark your passion.  After one helluva a year, the Venus/Mars conjunction in Leo may have more meaning to all of us than the conjunction in 2015 and it could be important as we roll into the other two conjunctions.  The fire that is activated in our belly now could be put through practical application (perhaps even make money) at Feb’s conjunction in Capricorn and be well received by our circles and community in March at zero Aquarius.    Take time this cycle to let Venus and Mars talk to you.