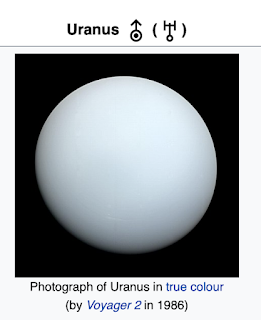 And here we go.  Earlier this year, between Feb and the end of April, we had NO outer and inner planets that were retrograde.   Since that time the outer planets have been turning retrograde one after another each month and now the final outer planet to join fray is Uranus.

Since these outer planets are retrograde every year it is on one hand no big deal.  But on another level, there is a revisit of tension with Uranus retrograde.    In 2021 Saturn square Uranus three times.   Covid, economic hurdles, inventory problems and distribution issues spoke to the planetary tension.   Of course January 6 insurrection was in the run up to the first aspect hit in 2021.   Once the final aspect happened in December of 2021 Saturn and Uranus went on their merry way and got some distance from each other.  In fact, in April and May, both planets had a nice healthy 10 degrees away from the square.   But once Saturn turned retrograde in June and now Uranus turning retrograde the two planets will get close to that square again.  They will not form an exact square, but they will be within one degree of each other.  We should not be surprised if we see an event in the news around August 24th that is a call back to 2021.   Issues around tech and certainly Crypto currency could be in the news.   Grid issues.    Uranus in Taurus highlights climate change issues.  Perhaps people on the move looking for security due to monster weather events.   Whatever it is, the tension will be thick until September 23 then Saturn turns direct and leaves that 1-degree orb and tells Uranus, ‘eat my smoke’.