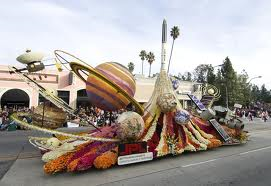 I don't usually pull images for Sabian symbols but when I saw the chart for this new moon and saw what is going on in the next 28 days and read the sabian symbol for 15 Leo is a parade.... Well, I felt a rose parade image made the most sense.   Big, silly, creative...let's all get a hat and walk down Colorado Blvd now!

It is going to be a big ass 28 day cycle.  This is not the time to be meek as a mouse.  Find what makes you tick and get ticking.  Stretch, be big, be bold.   BE ALIVE!     You will find my full write up HERE.http://margaretwendt.com/columns.php#copy

Here is a snippet. Go to link for full piece.

A Pageant, With Its Spectacular Floats, Moves Along A Street Crowded With Cheering People


I had a conversation with a family member not too long ago who was complaining about a celebrity in the news.   The beef was not so much about the celebrity as much as it was that the story was in the news.    I absolutely understood the rolled eyes and the complaint, “This isn’t news!”    But I did feel inclined to mention this is not limited to our blessed 21st century.   Archeologists have excavated thousands of examples of celebrity news from other eras.  For example, there is graffiti on walls in Pompeii bestowing the virtues of Tetraites a gladiator and his victory over another gladiator in one huge bout.  And it was not just local lore; pottery with Tetraites image was found as far away as France and England.  Basically, this guy was the Brad Pitt, Lance Armstrong, and probably Anthony Weiner (if there was texting) of Ancient Rome.   And he was not the only one to make it to pottery fame, (the equivalent to NY Post) there are tons of ancient celebrities on clay, caves and coins.   So, let’s all get on the same page on this topic.  There have been celebrities and fans interested in those celebrities for thousands of years.   Nothing new there.    And at the same time there was some gal or guy in a toga in Rome who rolled their eyes whenever anyone brought up Tetraites and said, “Oh, him again.  Who cares?  I have got grapes to squash.”

So why are humans drawn to celebrities either by attraction or repulsion?  And yes those who go on and on about celebrities in the anti voice, “I hate her, him, they are no big deal, blah, blah, blah” are a bit like characters in a Shakespeare play aka, “thou protest too much.”    They are hooked whether they know it or not.  Anyway, the dynamics behind the celebrity and the fan/non fan is a relationship that speaks to  unique creativity.   This person who has set him or herself apart by merit, by pedigree, by whatever means is really a reminder to us that we are all unique and special.   It is not so much about ‘Oh, look how cool Brad Pitt is building houses in the 9th ward of New Orleans.”   But more a reminder, “I have many interests too and I also want to be of service.”    It is not about making Lance Armstrong a hero-villain but more as a reminder, “All that talent wasted, where is my own hubris getting in my way?”   The celebrity versus the rest of us -- is just one huge mirror reflecting our own forgotten or unrealized desires.      And who helps us find those desires?  Leo.

During the Leo 28-day lunar cycle we are inspired to find our desires and above all -- be creative.   Creativity is a loaded word.    When you read it what comes up for you?  For many, being creative is like breathing.   Create, create, create, you are doing it all the time.  Or at the very least you acknowledge that you are connected to creating.

Then there are others who will say, “I’m not a creative type. I’m not an artist.”     Right there you have it wrong when you associate creativity with art. Creativity can be artistry but it is not limited to it.   For example you can be sitting at your...go to link for full piece.