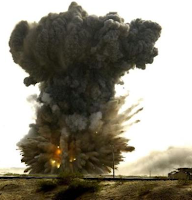 This Wednesday soldier Mars will be in opposition to explosive Pluto. It might be a Kaboom of a day but it is probably more like a day with Cold War salvos. Mars in Cancer is a warrior for his feelings while Pluto in Capricorn expresses NOTHING for Mars' feelings. If someone 'goes off ' on you today your instinct will probably be to do nothing. Stare at them and then walk away. The more emotional they get the colder you get. Or if you are the emotional one don't be surprised if you get all the emotions of Mt Rushmore on the other side of you. Nada.

It is also worth noting that at 12:09 pm Mercury in Libra will be squaring Pluto in Capricorn which just adds more chilliness to relationships.

On the broader picture it will be interesting to see if the square with Mercury and the Mars opposition foretells of our 2010 Summer. As mentioned here many times---Next summer we will have the cardinal climax between Pluto and Uranus and Jupiter and Mars and Saturn all in early degrees of Aries, Libra, Capricorn. The only missing cardinal sign is Cancer. Curiously, having Mercury in Libra square Pluto quickly followed by Mars Oppose Pluto could ring the bell. Take a look at the news on Wednesday and see what energy is out there---and note it may come back and bite us in the ass-pect.

If you are still unclear about the cardinal climax, HERE is a nice little summery by Robert Wilkerson.
Posted by Tracy at 7:20 PM