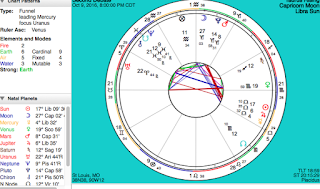 Mercury conjunct Jupiter is big rhetoric.  Not little boy rhetoric but big boy rhetoric.  The moon spent most of the day pulling away from Pluto and Mars and earlier this weekend the explosive nature of the aspect was out there for all of us to see.  Sigh.

Taurus Ascendant has ruling planet Venus is on the cusp of the 7th house.  Venus speaks to WOMEN. And this is certainly going to be a seminal to tonight's debate.  Venus is values and wealth.  We will hear a lot about both.

Sun in 6th house oppose Uranus in the 12th speaks to a VERY unstable, unworldly and probably disenchanted (12th) quality to the evening,

DJT has Sun on Jupiter which we discussed in yesterday's post.  Overplaying his hand is already in effect so it is hard to see him pulling it back.
Moon opposition his Venus does not speak well for his understanding of women, money and values tonight.
Moon oppose his Saturn speaks to someone not taking any hostages tonight.   Mercury on top of his Neptune continues a level of disconnection.
We already know he is getting Mars oppose Mercury which is not good for anyone who has to look calm and presidential.   Good luck on that one.

HRC
Sun sextile her Mars and Pluto supports a warrior on a mission tonight.   Venus Trine Moon is good for women and speaking of values.  Venus on top of her Mercury is good for charm.  Venus square Saturn will bring out a coldness.
Moon sextile Moon and Mercury and Jupiter very good for inspiration and connecting to others.
The Moon Square her Sun, she has major hurdle to get through and high in frustration and cold.