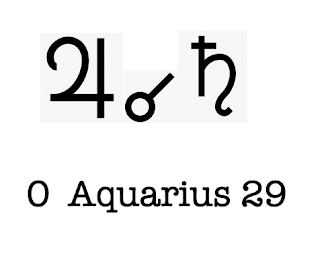 We have been discussing for some time the conjunction between Jupiter & Saturn in the sign Aquarius.   A conjunction is of course when two planets appear on top of each other.    Here are the facts about this conjunction:

Jupiter – Saturn conjunction takes place on December 21 at 10:20am PST at 0 degrees 29 of Aquarius.

December 21 is also the Winter Solstice exact at 2:02am PST.

In researching the last time Jupiter – Saturn formed a conjunction on the Winter Solstice it appears to have happened a very long time ago.  I have found some reports that say it was three thousand years ago and others who say over  five thousand years ago.   It is hard to pinpoint because most astrological computers do not go back that far.  Few of us are doing charts for hunters and gatherers fresh out of the ice age.

The last time Jupiter-Saturn had a conjunction was May 28, 2000.  That conjunction took place in the sign Taurus.

The last time Jupiter-Saturn had a conjunction in Aquarius was January 7, 1405.

Astronomers will tell you that the last time these two planets were this close was 1623 and 1226.  When two planets that can be seen with the naked eye come together, they end up looking like one bright star.   There was a merge of planets which formed the Bethlehem Star before the birth of Jesus indicated by the three wise men (astrologers no doubt).   You cannot miss this conjunction when you look up in the sky on the 21st.  Google it and you will see tons of astronomers weighing in.   They are downright giddy.

Once Jupiter and Saturn conjunct in Aquarius they will launch a  cycle where all the conjunctions by the two planets going forward will be in the air signs Gemini, Libra and Aquarius for about 200 years.

Given all of the above, it should be clear that the Jupiter-Saturn conjunction is a big deal.   What does it mean?

We are in midst of great changes and it is all happening in the first week of this lunar cycle with ripples heading out for the many years.  It does not mean that everything will be fully thought out this week or this month or even this year but the evolution of a new era is kicking into a new gear this week.

On December 16 at 9:04pm PST  Saturn will re-enter Aquarius.

Jupiter will enter Aquarius on December 19 at 5:07am PST.

As for the actual conjunction on Dec. 21,  those people who know their charts you should look to see what house has zero/one degrees Aquarius.  If you have it in your second house there will be emphasis on money and creative way to build something from the ground up.  If you have it in your third house, your communication will be up for some big ideas and approaches. I would imagine those people will have a bee in their bonnet about blogging.   Even if you do not know your chart you are probably seeing this energy begin to play out.   Perhaps as late as the last few days.   Jupiter is so huge he starts talking to us even when we aren’t ready for him.    Then there is Saturn who brings structure.    What needs work?  How would you benefit by restructuring your social circles?  How do you keep discipline in your circles?  How are you being productive in your circles?  Is everyone being heard in your circles? How do you keep cynicism at bay? What are your goals when you are with groups?  Are they the highest ideal?  Or do they cater to the renegade?   How do you manage the rebel without a cause energy?

On the global front we will see a lot of novel ideas.  Some will be great some will be misses.   The air sign conjunctions mean we will have a lot of ideas.  Some will work, some will not but there will be a lot of thinking and it can be more ecumenical than in the past two hundred years when Jupiter and Saturn conjunctions all took place in earth signs.   The earth cycle started in 1802  and ends on Dec 21.  Think about all that was made and sold between then and now?  What was wrong?  What was right?  What was built that is solid even today?  Where did we miss the mark?   Where did we invest and maybe we should not have invested?  Where did we not invest and probably should have invested?   Where do we need to rethink how we build?    Now in the air signs we will do a lot of thinking and talking and communicating.   Remember this is a cycle that is being launched.   Jupiter will move on to Pisces in a year and Saturn will be there in a few years so these planets do keep going but this cycle is launched.  This is the beginning of the story.

It is fun to remember that astrology is ruled by Aquarius.   As well as air travel, sororities and fraternities, organizations like NGOs, unusual hobbies, offbeat attitudes, revolutionary thinking.   Aquarius benefits greatly when it is reminded that family and friendships need nurturing.  It is not just enough to have big ideas.   We will have a lot of discussions about the perks and pitfalls to Aquarius as 2021 unfolds.