Pluto Changes Direction--September 22. Not for the weak of heart. 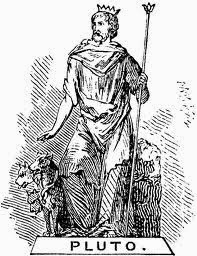 If you have been paying attention to both TracyAstroSalon AND the world then you know the planetary actions since 2008 have been tough.     No kidding.

Readers of this blog know that we spent a lot of the last two years talking about the extra burdensome grand crosses which ended in April (thank you, Universe).    Right in the middle of those tough aspects, Pluto turned retrograde (April 14)  at 13-14 degrees of Capricorn.   Now on September 22 Pluto will turn direct at 11 degrees of Cap activating a big, big, big evolutionary cycle.  Let's get into it a bit.

Pluto is no slouch of a planet and he is doing an important direction change during the balsamic phase of the moon.   During balsamic we let go and we release so that we are open for the New Moon.  On this particular balsamic the accent is on releasing Ego, misguided pride and selfishness.   How curious that the planet that demands death and rebirth is changing direction during the release phase with accent on Ego.   What part of our Egos may die?

Back in April when we were slogging out the cardinal crosses Pluto tried to hide by turning retrograde.   Of course, he could not exactly hide  since he was a key player in the street brawl.  But let’s say he ducked behind a car for a lot of the fighting.

Now when Pluto stations direct what information is he going to bring forward?   On a global picture look at Gaza, Syria and Isis and how they exploded during Pluto retrograde (I hadn’t even heard of Isis before this summer).  When Pluto turns direct we should get another wake up call on these matters plus more.   Personally, anyone with planets between 11 and 14 degrees of cardinal signs (Aries, Cancer, Libra and Capricorn) will be up to their eyeballs in changes.

But in truth ever since Uranus and Pluto started to square in 2012 and doesn't end until spring of next year, the walls have been closing in on all of us in some way.     Limited beliefs are a real bitch.    Especially limited beliefs around money, power and resources.   Why?   Scorpio is ruled by Pluto and Pluto is in Capricorn.  Capricorn is ruled by Saturn and Saturn is in Scorpio.  Having these ruling planets in each other's home sign since 2012 means the planets are in mutual reception but it will end in December when Saturn moves into Sagittarius.

So, I ask you---If Pluto demands death, rebirth and evolution.   And Saturn cannot stand wasted money, time or resources---do you think these two are going to do everything they can to get our attention?   Yes, me, too.   And let's continue the math, Uranus in Aries has two more squares with Pluto.  December 15th and then the final 7th square on March 17, 2015.

Even if you don't know astrology can you feel the pressure?  Yeah, it is palpable.

Starting on September 22nd we are put on notice to clean stuff.  Not stupid cleaning but real deep cleaning in a profound manner.   And what needs cleaning?
Well ask yourself the following:
How is my money?
How are my joint resources?
How is my power?
Where do I give power away?  Even if it is for a minute?
How is my sex life?
Where am I stuck fighting a battle instead of winning a war?
What would it look like if I called something 'dead and over'?
Where am I "Sick and tired of being sick and tired?"

Watch how the energy changes after it turns direct on Monday and you’ll get a good idea what December and March are going to be all about.     And remember if you are stuck on any of it, then once again ask yourself some questions:  “Where do I need to transform?”   “Where do I need to be willing to morph?”  “Where do I need to jump without a net?”   And do not even suggest there is no area that needs morphing.  That will be a waste of all our time.