Preparing for next month's Treasure Map! 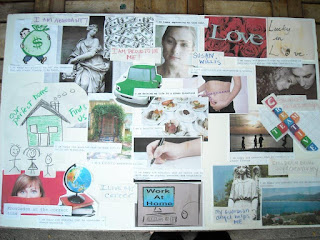 Today is March 30.  We have about ten days   until Treasure Maps which start on April 7 at 7:23am EDT

When was the last time you made a Treasure Map?
Now would be a great year to get it up and going again.

Have you never made a Treasure Map?   Are you in the dark about the power, the fun and the joy of Treasure Mapping?

Here is a handy dandy Q&A
all about Treasure Maps.


And here is the NEW MOON report for this ARies lunar month.
(Read it, too)
As for Treasure Maps....take a look at the details:

WHAT IS A TREASURE MAP?   A treasure map is a collage made of photos, magazines pictures, words, pieces of things that make sense to you.   Whatever you want and you put them on a foam core board or cardboard or something strong that can handle the collage.  This collage is something you can look at all year and it will be your MAP of what you want for the coming year.

Do you even know what you want? If you are like many of us, you are so busy running around, taking care of everyone else that you don’t  have a fig of an idea what you want for your new year.  This is the beauty of the process.  Building a Treasure Map you get to sit down and figure it out.   Please give yourself the time to do it.  Yes, I want you to be just that selfish and dare to dream.

Why do we do it now and not January?   Treasure Maps are made during the Aries new moon. Aries new moon changes from year to year and this year, it will take place on April 7, 2016 7:23am (18 Aries 17).

Maps are made on Aries new moon, because that is the first sign of the zodiac. Aries is when you plant your seeds. It is the real beginning of the New Year. It should not be confused with the first day of spring, which was on March 20.

New moon means the sun and moon are in the same degree. For those who don't know much about astrology (which is totally okay) Aries is the sign of SIGHT.  That's why it is so important to have pictures of what you want. You need to visualize it. Or if you don't do photos/pictures then put up words. It is just important for you to SEE THEM.

So, I'm going to be busy on April 7 can I start it before the 7th?  NO.

Do I have to buy a bunch of magazines, I'm broke, can I just borrow some old ones from friends   When I started my treasure maps I always did them with fresh new magazines. And in the old days, (not married, no children) I spent a lot of dough on magazines because I wanted lots of choices. But with time, I now only get a few magazines. I never borrowed magazines from friends however I have friends who do use borrowed magazines and were happy with their results. So, it really is your call. But if you do borrow magazine, make sure they are put away until April 7th so they are fresh to you on that date.

What if I don't want magazine photos, can I just use my own pictures?  Like my husband, my kids, etc.?  Sure. I usually scanned them or printed new ones so that I would not wreck my originals.   Again it is your call.
Do I only focus on things?

Heck no! I would  encourage you to also focus on beliefs and environments. Affirmations like “I’m abundant” or “I am always feeling loved” “My health is vibrant.” “My partner and I are always growing closer.”

Can I paint or write on my Treasure Map?

Of course!  Be as creative as you want.   You can write on your map, or paint your map again, whatever you want.   I often type up affirmations and put them on the map.   Be sure that they are in present tense.   For example,  “I will be financially solid”  versus, “I’m financially secure.”  (the second one is present tense)   And some gratitude is good as well, “I’m grateful that my family has optimal health.”

Is there any pattern I have to use when I put the photos or the words on my board?   No you can do it anyway you want.   I will say that in previous years my friends and I have used the feng shui baguas as a pattern. Basically I would break up the board into 9 areas.   If you use the feng shui baguas, you will naturally cover most all areas of your life,as you can see it is all represented there. But again, you don’t have to do it that way.  Some people have even made round boards.

Can I build a cyber-map?

Many people are more comfortable with cyber maps, which are always in sight on their computer.

And they have had success.   Again, it is your call, do what your heart calls you to do.

How much time do I have to build my map?   Ideally you should build your map during the new phase of Aries new moon, which would take you from the April 7 until April 10 (12:06pm EDT).  But if you need more time, you can give yourself up until Full Moon (April 22 1:23am EDT) I encourage people to do it in the very beginning but I don’t want people to be pressured so if you need the whole waxing moon you can use it.   But if you can’t get it done by April 22 1:23am EDT then skip it this year and make your map next year.

Do I have to do it alone or can I do it with friends?  You can do it either way. I build mine with my two friends. We are like family and it felt so right to do it with them. We start now just start them together and then finish them at home later. I know that there are several people who have parties.   I will say this, it is a lot of fun to do them with others--.My friends would pass around the magazines.. "Hey, I found a great beach bungalow does anyone need a beach vacation? Or "I have got to lose 10 pounds, any ideas what I should put on my map?" and low and behold someone will come up with a good suggestion.

Do I have to finish it all at one sitting?   No. Often I cut my stuff out with my friends. Maybe glue a little thing here or there and then take it home and finish it over the course of a day or two.

Can my kids do it with me?  Yes! It is great for them to focus and think about what they want. Have them build their own maps. They also might give you their thoughts about what they think you should have in your life. Which helps them to think beyond themselves, always a good thing, right?

Okay. I don't want to sound like a spoilsport but I’m just not interested in building a collage, can I do something else?   Sure you can take a piece of orange paper and write down wishes or affirmations during Treasure Map time. Sometimes I felt like I needed to switch to 'less is more' after several years of mapping.  (However, I would encourage newcomers to make the actual maps.)  For those more seasoned, if you really don't feel the call then just write your desires down on orange paper. So, vibrant. So Aries.

Is it ok to have things continue over to the next year? Long-term, ongoing stuff that has progressed but needs to continue to progress?   Yes. Of course. But with a small caveat. My experience after doing these for years is that when something really takes time and doesn't gel in the first year there is something still not ready. It might be something you are aware of for example one cyber friend shifted her map from year one to year two by focusing on less things.  She had overwhelmed herself with her first map and had some small successes but the second year when it was less she had more results.   And others actually some successes needed a couple of maps to get it done.   Sometimes, a Mapper had to move or change jobs in one year and then the following year the big get arrived.  I’m thinking of one person who wanted a pregnancy but what happened was she and her husband had to move before it happened.  She didn’t know that on the first map.   I guess the little soul needed to come through in a different state!   Anyway, follow your gut and put up what you really want and don’t lose hope if it takes a little longer.
Posted by Tracy at 2:16 PM