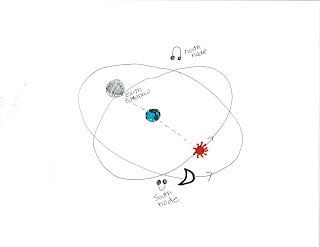 Nodes are points and are always near eclipses

Every 18 months the Lunar Nodes transition into new signs.    The Nodes are not a planet.   They are points that are formed where the orbit of the moon crosses the orbit of the sun.  If you have ever looked at how Earth cast shadows upon Sun & Moon to form eclipses, it is the same axis points as the nodes.   All eclipses are near the node points.   We will now move into eclipses that take place in June & December then May & November until 2022.

When the nodes change signs (they move backwards) they usher in a new cycle for humanity with both hurdles and opportunities.  Finding the lesson in the new awareness, acting upon it and gathering with others (who also rise to the occasion) is the gift of the cycle.

On a personal level, I like the nodes and look to them for lessons and gifts.  I always encourage those people pursuing astrology to stretch and ‘do their north node.’    It may not be easy at first and there are usually delays around it as I find people have a general resistance to the work when they are young.  But as one gets older, people begin to realize that exactly what they resist is exactly what they end up craving and that is often packed into the node sign and house.   In my experience when you do the work of your North/South Nodes you will be rewarded.

On the mundane level, we all ‘go through’ the node energy together. I remember on 9/11 when the North Node was in Cancer, the sign of home and family and the South Node was in Capricorn with emphasis on business and career, we all hugged the ones we loved a little harder that day.  It was also extraordinary that most people killed on 9/11 were at work.      A few years later, when Hurricane Katrina hit and I saw all those people in trouble I kept thinking of North Node in Aries—we were missing a leader, a warrior, we seemed stuck while people waited for others (South node Libra).

The North Node in Gemini speaks to our ability to communicate with truth and honesty.  Critical thinking should be pronounced.  Asking questions is paramount.  Speaking with neighbors, socializing in local arenas will be important.   Gemini is an energy similar to a busy bee, going from one flower to another.  Pollinating our local world with our thinking or listening to others and their truth brings in a new pollination and inform us.

We will need to take care that we not get caught in the less evolved Gemini such as gossip and shallowness.   Take care to double check facts, (a good Gemini word).  There will be a desire to move about which may be tricky in times of quarantine, but Zooms will, no doubt, be high.     We will need to avoid the pitfalls of Sagittarius; zealotry, xenophobia and righteousness that is based on opinions not facts.   Know-it-alls without updated information need to be brought up to speed or perhaps step aside.

The last time the nodes were in Gemini/Sagittarius was October 2001- April 2003.   The war with Iraq was launched during this cycle which was later proven to be based on faulty information. More people perhaps needed to ask more questions.    What is interesting is Congresswoman Barbara Lee was the only NO vote on the Authorization of Use of Military Force Against Terrorists.    She "warned her colleagues to be 'careful not to embark on an open-ended war with neither an exit strategy nor a focused target'".   Congressmember Lee’s observation arguably has stood the test of time with many senators and members of congress later publicly regretting their 2002 vote.  Ms Lee, the daughter of a Lt. Colonel, born in 1946 has North Node in Gemini.

There will be teachers who show up in the zeitgeist who are either schooled in academia or by virtue of their experience or thoughtful approaches which will make them a natural teacher.   The gifted astrologer and writer Jan Spiller wrote about the nodes and how to use them in her excellent book Astrology for the Soul.     I cannot recommend the book enough to anyone who wants to know how they can benefit by their Node placements.  I wanted to go back to Jan’s book before writing this article to remind myself of her take on natal chart nodes. Although, it is not mundane, I still found many valuable snippets that can be applied for a world perspective.   One note in particular:

“Gemini North Node people are learning to value human relations and the importance of maintaining good will in their daily interactions with others.  They have a tendency to be so aware of their own Truth and their own aims that they are likely to forget the importance of treating others gently.”    (page 149)

We will talk more about the Gemini/Sagittarius at the eclipses but until then see if you notice in your own body, you circles and the world in general if there is uptick in seeking knowledge and expressions of  truth.