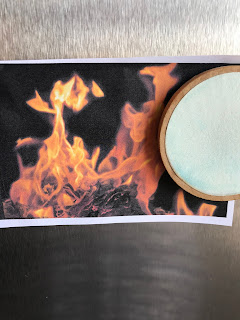 A flame-y full moon on a fridge, in Covid,

The Aries Full moon on October 1 is the first full moon in October and then on the 31st is the Taurus Full Moon which of course will be a blue moon (two full in one month) on Halloween.   Sure, a blue moon on Halloween?  Yes, why not in 2020.

The Aries full moon is the complement to the Virgo New Moon which launched two weeks ago.  In that report we discussed the intense astrological period we are in between September – December (Please give it a read).   This is not a season for the meek.   While every day may not be an S show, it could feel like it and it may all blur in our memory as a mess.  But we must remember the power of the Virgo lunar cycle (which we are still in for two more weeks) that says, “Take everything, one step, one conversation, one bite of food, one dollar spent, one little part ---at a time.”    Everything is do-able when it is tackled in manageable sizes.

The Aries Full moon unfolds three days after Saturn station directs (9/28) and two days after the intense Mars square Saturn (9/29) and three days before Pluto stations direct (10/4) This is an astrological grind which we will see on the mundane level (in the world) and we could feel personally.   It is almost difficult to explain except to say what you see in the news and feel in your gut has an astrological significance.   So, in that environment we get fiery Aries Full moon.  Aries loves birth, doing something new, carving its own way, it seeks independence and it reminds us, “I am”.  It loves to feel its own need to survive.  In short, it likes to get its blood going and it enjoys a good tussle.

While the chart for the full moon is not burdened with tough aspects, the fact of it coming up in this heated time and so close to the Mars Saturn aspect, suggest that frustrations may percolate, resentments build, feelings of trapped or shackled will rub us wrong.  So much that we might say, do, respond more sharply than normal.   Some people who have no problem leaning into their anger --will do what they do when they are angered (with enthusiasm no doubt).     And there are those who can tap into the anger and get super smart and practical and use it in a productive manner.   Great. But the people who are most challenged during this Full Moon (and Mars’ retrograde in general) are the people who fear their anger.    For some they fear that if they unleash their anger they will never stop.   Okay.  Maybe that serves you most of the time but remember this is a full moon where the Sun in Libra is on the other side of the Moon in Aries.   Libra loves to keep peace.  But during this Aries full moon with a retrograde Mars in Aries (home sign) getting into it with as many planets as he can---one needs to ask if that is peace is at any cost?   Are you paying for it in other ways?  Perhaps a little lean in on anger this full moon could be of benefit.  You don’t need to go crazy but maybe baring teeth might put someone on notice that you are here, too.  That is perfect Aries.

One last thing, while the Sun and Moon are not in big aspects with planets there is a conjunction between the moon and Chiron suggesting there is a lesson about owning power and finding the fire inside us.   Perhaps the fire and some inspiration will find you during this phase.   Great.    The full moon lasts from October 1, 2:05pm pdt until October 5, 5:25pm PDT