Combing over the sturm and drang of Donald Trump 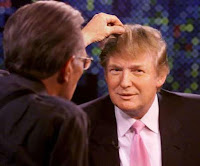 Donald Trump has been in the news of late. Of course, with a Sun in Gemini, Moon in Sag and Leo Rising, HRH Trump is always in the news. The question is for some people (not me) will Donald Trump be the GOP candidate for 2012 President? In a word: No.

And he knows it.

Sun conjunct Uranus in the 10th house, he knows darn well he would be bored by politics and the way things get done in Washington.

Mars and Pluto in the 12th house are demons that will always need a place to be released. And those demons would make for interesting fodder for press but not good for his family which would sting his Mercury and Venus in Cancer.
Mars has a nice trine to his Moon in Sag in his 4th house and along with the 2nd house planets this put the accent on real estate and homes along with family.

And as much as his Leo Ascendent loves to be the center of attention and his Moon in Sag loves to shoot off opinions being a public official would thwart his desire to control his world (Pluto in 12th) to ever last detail. Too much of his life would be out of his hands. And that is not going to work for a man at 60+.


If I was to bet on any part of his chart that actually COULD be an elected official it might be his Saturn, Mercury, Venus in Cancer in the 11th house. Cancer does speak to a pulse and understanding of people and his Mercury and Venus there does bring a lot of friends. Saturn is commitment and discipline and conjuncting his Venus, could even bring friends who could contribute to a political campaign. But given a choice between having a friend contribute to his political campaign or go in partnership with him on a lucrative property, I believe his Jupiter in Libra in the second house would win. For Trump it needs to be personal more than public.

And as much as he is out there causing sturm and drang about the current administrations and the state of the country he is not going to throw his hat in the ring for a move down south. Anyway, Washington humidity would be murder on his hair.

And no Leo Ascendent would ever make that sacrifice.

ETA: Today The White House released Obama's birth certificate in response to Donald Trump. This is DT's reaction. See you can find the Gemini, The Sag and the Leo in his response.

Today I'm very proud of myself, because I've accomplished something that no one else has been able to accomplish," said Trump on the release of the president's birth certificate, according to NBC News. "I want to look at it, but I hope it's true. ... But he should have done it a long time ago."
Posted by Tracy at 7:11 AM