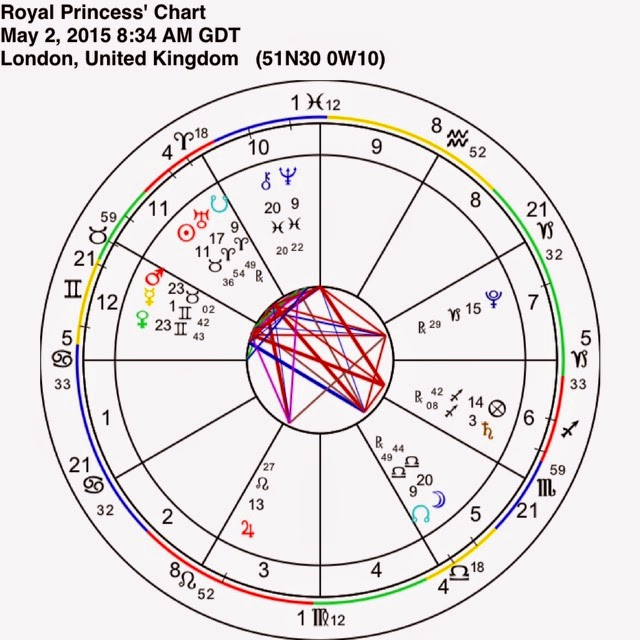 A Taurus!   Just like her great grand mum Queen Elizabeth.

Catherine, Duchess of Cambridge gave birth at 8:34a this morning (5/2).  Her due date was April but whether the new princess was supposed to have arrived during Aries is hard to know.  What we do know is Taurus knows how to show up day in and day out year after to year to their job ...just look at Taurus Queen Elizabeth's calendar for the last sixty years.

The first thing that popped out at me was her Cancer Rising.  I thought of Princess  Diana and her Cancer Sun.  Which then got passed down to William who was born on the 1982 Cancer New Moon giving him a Moon and Sun in Cancer .  And William's Sun/Moon are right on New Princess's Ascendent.   Daddy and Princess will be tight!  And the Duchess of Catherine with her own Moon in Cancer will be just as strong sitting in her daughter's first house.   The Princess has Moon in Libra which is always seeking balance and in her case in the fifth house which connects to creativity, drama and royalty.    The North Node in Libra in the 5th suggest she she is here to express her passion in her own way and not follow the group.  And since the 5th house also connects to love affairs and passion,  many many newpapers will make a lot of money following her and her various boyfriends.    Kate's Sun in Cap and the Moon are in square with new princess's Moon so there will be some royal mother daughter rows.  But   New Princess's Sun in Taurus makes a trine to Mom's Sun so they are in sync in many other ways most of them practical.

Sun in the 11th house will support her sense of community.    Suns in the 11th house know that they are here on this planet to be connected to others.  When young they will need many best friends but as they get older they can take that energy into community and do good for others.   Perfect role for our new princess.

Mars in Aries, Venus and Mercury Gemini are all in the 12th house which will be interesting to watch as it unfolds.  The twelfth house speaks to how we feel out of control or trapped and karma.   It is also the house of fears and things in our unconscious.   Little Princess may have a variety of fears, spiders, dark, ceiling fans..who knows.   Maybe a former royal is being reborn to get  it 'right' this time? Sure.   In the meantime we'll watch the sweet little Taurus with Cancer rising and Moon in Libra charm the pants off the world.  Also,  she should expect an extra good birthday present every year from David Beckham who shares the same birthdate!