A take on North Korea 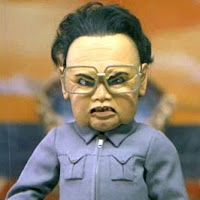 Obviously, those silly Kims (father and son) are at it again on the big K pennisula. My own take is when there is too much attention on some other place on our planet they stir up a mess to get the light back on them. I can't put my finger on it but it feels Leo like....anyway, I am not versed in the charts in play but I found a relevent posting by Lynn Hayes on her Astrological Musings.


The Sun in the North Korea chart is in Virgo where it is in the final stage of a transit of Saturn. Virgo has many positive attributes, but one of its negative qualities is a tendency towards miserliness and even deprivation and we have certainly seen this negative side with the starvation that occurs in that country. Virgo is an industrious sign that emphasizes humility and service rather than excellence and personal achievement, and this is certainly reflected in the fact that the North Korean government is run by the Korean Workers Party.

The Sun here is squared by Jupiter which can reveal a tendency towards arrogance and self-righteousness. Jupiter is particularly powerful here in its own sign of Sagittarius and while we like to think of Jupiter in its role as "The Greater Benefic" it can denote a fanatical and dogmatic philosophy of government. I like to say that Jupiter shows where we want to be god (Jupiter of course was King of the gods on Mt. Olympus), and with a powerful Jupiter in a challenging square to the Sun one's self-aggrandizement can take dangerous proportions.

Read more: http://blog.beliefnet.com/astrologicalmusings/2010/11/the-astrology-of-north-korea-u.html#ixzz16bRJA2Eq
Posted by Tracy at 10:24 AM