Wiki Leaks and the leaker 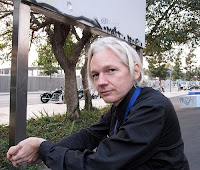 Over at Lynn Hayes site Lynn has dug into the Interpol website and found a birth date for Julian Assange' aka TheBigWikiLeaker. That was some great sleuthing by Lynn and she has some good notes about his chart.

I am not that versed in all that Julian leaked because it makes me uncomfortable to read it. But I do know there was a lot missives where people let down there hair and bitch out their associates. With a result of Secretary of State Clinton inviting ambassadors over to her office for tea and apologies. Luckily I did hear one of the ambassadors said, "You should see what we say about the Americans."

Anyway, it turns out Julian is a Cancer with Moon in Scorpio (probably a trine) and Mercury in Cancer. I pointed out in Lynn's comments section that his Saturn in Gemini oppose Neptune in Sag is very prominent in my mind. Is he here for good or to muckrake? I dunno. But one month before he was born, during that aspect, The Pentagon Papers were released.

For me every time I see Julian's photo I can't help but think, "Is his dad Andy Warhol?" And on that theme, around the same time The Pentagon Papers were released Warhol opened his play Pork. Here's a description of that period.

Pork was based on tape-recorded telephone conversations between Andy Warhol and Brigid Berlin about her family's private life. Her mother Honey Berlin, a Fifth Avenue socialite who included the Duke of Windsor amongst her close friends, was livid when she found out about the play by reading a review of it in the New York Times. Brigid angrily called Andy and told him, "You're nothing but a fucking faggot! You don't care about anyone but yourself! And your goddamn fucking fame! And your fucking Factory! And your fucking money!" (BC66)

Pork also played in London at the Roundhouse from August 2 - August 28th. Promotional material for the play warned "Mature Adults Only!" (AWMU184) It starred Jayne County as "Vulva," and Cherry Vanilla as "Pork."

Although some Warhol books have said that DAVID BOWIE was inspired to write the song Andy Warhol Superstar after seeing Pork, the song was actually written prior to Bowie seeing the play.
Posted by Tracy at 5:09 PM