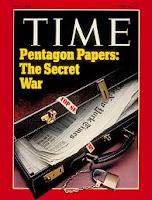 So, for those of you who are watching ....... back on December 3rd. I commented HERE that Lynn Hayes had found a birthdate for Julian Assange. I commented on her blog that I thought it was interesting when I looked at events from the news around his birthdate that one month before he was born, The Pentagon Papers were released. For those of you who do not know what are The Pentagon Papers---they were a study on the history of Vietnam and US's action including bombings in Laos and Cambodia. Basically all the things the US was doing but not telling the press.

Daniel Ellsberg who worked for the The Rand Institute,(A "Think Tank" that must know something based on the prime piece of property in Santa Monica they purchased 60 years ago!) had access to the research took the opportunity to photo copy the papers and released them to the NY Times. When those papers hit the newstands it caused a huge sensation and if the country had little appetite for war they had even less after those papers were revealed.
The question for many when it happened was Ellsberg a hero or a traitor?
At the time of the release Saturn was at the end of Taurus right near zero Gemini opposed Neptune at 2 degree Sag. Who is telling the truth would certainly come up with those 2 signs at play.

What I think is very weird---is a few days after my post and this has nothing to do with me it is just the weird timing, I saw John Kerry on Meet the press stating, "Wikileaks is no Pentagon Papers."

Then last week Richard Holbroke died. I had no idea until his death that when he was younger and working for the undersecretaries of the state that he wrote one of the volumes that would later become The Pentagon Papers.

And then yesterday Daniel Ellsberg father of The Pentagon Papers came out and said that Julian Assange was a hero.

I am not going to weigh in on who is a hero or who is a traitor but I will say that I think it is interesting that all of this stuff is coming out since Uranus turned direct in Pisces and his heading for Aries the direct opposite of the Pentagon Papers' Uranus in Libra.
Posted by Tracy at 7:09 AM