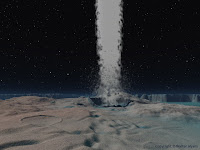 When it comes to aspects with Pluto in Capricorn I am often inspired by the ice volcanos on Triton. Something about that image rings true about what the planets speak. Disruptive but cold to the touch.

Many of you read my new moon article and noticed that I pulled out Monday December 13from the 28 day lunar cycle as the day to keep your eyes on. The energy of this day is pretty packed.

The sabian symbol for 4-5 deg Capricorn is Indians On The Warpath. While Some Men Row A Well-Filled Canoe, Others In It Perform A War Dance

This symbol is a redux from earlier this year and I cannot for the life me understand why I didn't post the sabian symbol for it------ but it is the same degree as June 26 Lunar Eclipse. Do you remember where you were that weekend? Do you remember the energy. Here's my link to that time.

We will be revisiting the energy of that time.

I can't help but look at a few things in the last days and feel that the 13th energy is already washing up on us.

Senate will or will not ratify START (nuclear treaties with Russia)

and probably THE most compelling energy move of all at least in my opinion occurred this morning (saturday) when China announced that their inflation from November is over 5 percent. Why is THIS such a big deal? Because what China will do to slow down inflation can have a ripple effect in all stocks, bonds and metals around the world. Lets see what Monday looks like.

In the meantime, as a reminder (from my new moon article) for this weekend and Monday----