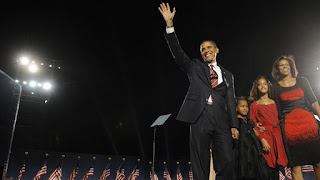 They said it could not be done. They said "Not in their lifetime" They said, "America is not ready."
BAM! And just like that the bubble popped.
Barack Obama made history on Novembe 4th. I don't need to spell it out, you know he did.
So, what do we know about his astrological Chart? He has his Sun in Leo. Moon in Gemini and Aquarius rising. The United States loves Aquarius. Afterall, the USA has moon in Aquarius. And think about some of its favorite stars, Oprah, Paul Newman, John Travolta---America loves these people and not just for a month or two like American Idol...they love them for years and years... through the decades... It is hard to imagine Barack's Aquarius Rising disappointing America, but then he is in politics and half the game of politics is pissing off people. But at least for now, let's enjoy his Aquarius Rising.
Of course, his Leo sun makes him long on charisma and charm. It also gives him the backbone to know he can do the job. No self doubts with him. Just like Bill Clinton, another Leo President. Bill never seemed to waiver from his ability to do the job. Even in the middle of a scandal. It is worth noting that when he left office Bill Clinton's approval rating was around 62 percent. Where as, GWB who had no blue dress and interns named Monica to mess up his White House, his approval rating is hovering around 23 percent. Ah, the power of a charismatic Leo.
Barack's moon in Gemini is clever and quick and it will help him bring a smart group of advisors. We have had two Gemini presidents, JFK and the first George Bush. Both men were smart. Both liked smart people. They are both clever although, perhaps one was a bit more nefarious than the other. We should expect the same smart and cleverness with Barack's Moon in Gemini, it is still super smart and isn't it nice to think of a curious and smart man in that office again? I've been waiting a very long time. Sigh.
We have plenty of time to discuss his chart and the future and frankly is is all overwhelming now as we are still in the afterglow of yesterday.
But I will say one small thing about the future, when using equal house system (AstrodataBank chart) the cusp of Barack's 2nd house and 8th house are 18 degrees Virgo and 18 Degrees Pisces. Does that degree mean anything to any of you? It should. Yesterday's Saturn/ Uranus Opposition was at 18 degrees Virgo/Pisces. And 2nd house is money, possessions, banks. 8th house is loans, debt and insurance. Additionally, crime, real estate, taxes, blood and values will be highlighted.
Clearly, in my opinion The Economy is going to be his first challenge and since this opposition is number 1 of 5, we are not anywhere near the end of the turmoil, it is only going to grow more. Especially when you think that these planets are just barely in his 2nd and 8th houses. We have a lot of work in front of us. Or, I should say Obama has a lot of work. Which leads me to my favorite satire news source "The Onion" . Today, their headline said it all, "Black Man Given Nation's Most Worst Job."
Posted by Tracy at 4:58 PM