The last gasp of Pluto in Sag--More bad journalism 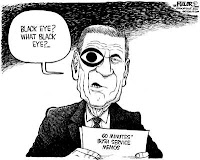 As the final days of Pluto in Sagittarius are upon us, it is somewhat disheartening to see that one of the main issues exposed during Pluto’s trek is still grabbing our attention--- Bad Journalism.

Sagittarius rules publishing/media/journalism. It is the printed word. Yes, I know we are slowly phasing out paper and replacing it with electronic signals sent to your little computer, but cyberjournalism is still journalism and therefore ruled by Sag.

Truly, the saga of Pluto in Sag and its celebration of pulp began almost on minute one. The trial of OJ Simpson for the murder of his wife Nicole began one week after Pluto entered Sag (Jan 1995). Yes, the murder took place while Pluto was in the last degrees of Scorpio (perfect) but the trial began in Sag. And, yes, by the time of the verdict, Pluto had retrograde back into Scorpio. But it did not matter, the die was cast. The frenzy of reporters who threw themselves into the fray at Los Angeles County Courthouse was mind boggling. Circus was an understatement.

Gossip mills popped up everywhere. Neighbors sold stories to trashy magazines and talk shows. God knows, careers were made or at least defined during that period and even a whole new channel was created-- Court TV. And this was all during the first 2 degrees of Pluto in Sag!

The years that followed brought us Matt Drudge and his rumor mill along with NY Times reporter Jason Blair and Oprah Book Club author James Frey who both used a lot of fiction to help sell "true" stories. And then we publicly watched them get their butts kicked over it. Which to me was even more Pluto in Sag. Sigh.
Later we would see News agencies call early results for the 2000 election and then later offer a mea culpa, which I am sure was cold comfort to Al Gore and whoever voted for him. And then what about all of the reporters who we got to know intimately while they covered, Katrina, The Indian Ocean Tsunami and September 11th? One wonders what Edward Murrow would have thought if he watched some of their reports? I think he shuddered from his grave.

The bottom line is that Pluto’s trek through Sag has not been pretty for the world of journalism—hell, even Dan Rather got caught up in the melee. And here we are on the final days and we are once again dealing with the liars and the lies that they tell. Which is bad enough, but what is more bad, is the news agencies who report it!

Currently, the nonsense that came out last week that Sarah Palin did not know Africa was a continent, which was reported from “anonymous insiders” from within the MCCain Camp, has turned out to be jokers who set up a huge hoax. And who reported it? FoxNews, MSNBC and various papers. Shame on all of them! “A pox on all of them” I say.
I gotta say I will get down on my hands and knees and pray that all of this will settle down once Pluto moves into Capricorn. Sure, we might go into a complete economic depression and lose our federal reserve... but at least the pulp will stop! Or at least I hope so.
Posted by Tracy at 10:23 AM