Mountain Astrologer on the Newstand! 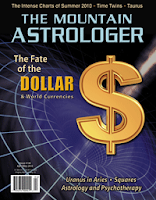 I received the latest Mountain Astroloer in my mail this week. I have not had the time to read the whole issue but I am about half way through it and once again, it is a spectacular and timely material.


In particular, The cover story, "The Astrology of the US Dollar and World Currencies" is a must read for anyone who uses US dollars. Once again, we are brought back to the topic that I have certainly discussed which is the chart of The Federal Reserve. I do not consider myself an expert on this topic by a long shot but there are plenty of astrologers who know TFR chart and what a beating it is taking at this time. One such astrologer is Maurice Lavenant. I have read other articles by Mr. Lavenant and all of them well researched, especially in historical context. Naturally, he speaks of the tough aspects we are having this summer and how they fit up against TFR chart. And although it is not pretty, he is not predicting what way the chips will fall. Just that the chips will fall.

I also found Tem Tearrktar "A Planetary Wake Up Call: June-August 2010" an important read. Again, we have been talking a lot about these 2010 aspects for quite some time. But every time I read another astrologer's take on it, I feel I am informed. Each one of us brings our own nuance to the discussion. But for me, I think that feeling of "being informed" is vital. Of course, I am a Sag, so the more info the better!

Tem is the editor of Mountain Astrologer and at the end of the article he mentioned that starting in April TMA's home page will provide links on their site that they think are the most detailed and useful in interpreting and preparing for June-August 2010 and beyond. They also have a TMA page on Facebook where this is already a discussion going on for each chart of the 6 hard aspects. I have not been there yet, but I did want to let you know about it.

I'm anxious to crack the rest of the magazine as soon as I can, I hope some of you will hit the newsstands or go online and order your copy.
Posted by Tracy at 5:21 PM