Jumping Jupiter and Uranus too 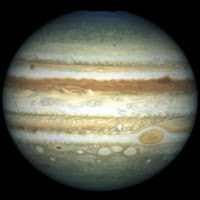 on June 6 at 2:28 am, Jupiter moves out of Pisces and into Aries where it will stay until September (before it retrogrades back to Pisces). The last time Jupiter was in Aries was between 1999 and 2000 and before that was 1987 & 1988 so you may have a call back to those periods. Energetically, you were probably breaking ground. In what areas of your life were you fiery? How were you a warrior? How were you a survivalist? If we look back on the last Jupiter in Aries period, we recall Elian Gonzales was plucked out the Atlantic ocean, a small boy, the lone survivor of a difficult trip—perfectly Aries. NATO waged war on Yugoslavia which was the first time they attacked a sovereign country and curiously, it was also the first time the Dow Jones crossed 10,000. That is a lot of Arian energy and perhaps one of the saddest chapters in US History also took place--- Columbine. (No surprise since weapons are in the Aries tool box.) We will all need to guard against misguided anger and realize that our patience will be short for the next year. For a business take on Jupiter in Aries take a look at this link:


Now if any of you think Jupiter’s move into Aries will be subtle and it will take all year for it to show itself, well you would be WRONG. We will see what this next year is all about within a few days of Jupiter in Aries because two days later on June 8th Jupiter will be on top of Uranus in Aries. This can only be described as, “Mr. Fire, Meet Mr. Gasoline.” Additionally, the minute Jupiter goes into Aries it will begin its dog fight with Pluto in Capricorn. The first hit is not until late July but the fight will start much earlier with some nasty growls, we should expect something to get our attention, personally and globally. I think it is interesting that these two fiery energies which demand speed and show little patience are occurring during the Taurus lunar cycle which is always saying, “sloooooowwww down”. The rub of course is that they can’t slow down.
Posted by Tracy at 6:40 AM