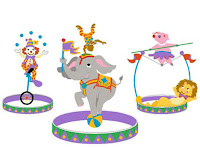 So, here we sit in the middle of the week---Jupiter moved into Aries on Sunday, Mars moved into Virgo on Monday and yesterday Jupiter got on top of Uranus in Aries. Are you feeling the 3 ring circus? It is out there for us to see and it is inside our own lives. Yesterday, was an election day in my state and several others and although it was not one of those SuperTuesdays where by the end of the night everyone knows the game has changed, it certainly was cuckoo. Some incumbents stayed, others out, tea partiers took a couple positions much to the pleasure of the democratic opposition---frankly the only thing missing was a guy in a top hat and dozen clowns crammed in a car. You can read more HERE.

Now, how is your own personal life? How are you feeling Jupiter and Uranus? Yesterday, I was juggling so much I felt like an octopus with 8 balls in the air. It was cuckoo. I'm sure you felt it somewhere. Remember, Uranus and Jupiter at Zero Aries is somewhere in your chart. Take a look at that spot in your chart and I'm sure you'll see your 3 ring circus. Check the house. Check to see if you have other planets and Zero degrees and see if they make an aspect with Jupiter/Uranus. But the thing to remember is that under that Circus Energy is something more, Aries is the sign of new beginnings. It is where you are are heading. It is the part of you that looks off in the distance and says, "I'm going there!" and then you put one foot in front of the other and you go. Are you surprised that warriors are rooted in Aries? They get the job done.

But back to the circus, so, as you juggle those balls you ask yourself what are you feeling? There should be a calling coming up. I want to do more of _____ in my life. I don't want to do _____. I am ready for _______. Those statements will surface as we process Jupiter in Aries. And they will be up for us as Jupiter&Uranus remain in conjunction in Aries (this summer). So watch what comes up. There is a life in the circus for you!
Posted by Tracy at 6:25 AM