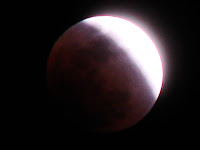 Are you feeling the eclipse yet? You should be or as my friend Carol said, “Gad the eclipse is hitting us already....can't believe an East Coast earthquake, the uncapping of the BP well and McChrystal all on the same day”. To Carol I said, “ No kidding!”

The pressure has been mounting all week and I anticipate the energy we experience this week and weekend will have long lasting effects. Accent on “long”. Remember we have been discussing the cardinal cross/crisis/climax all year and this weekend’s Lunar eclipse is part of it. The Full Moon is at 5 degrees Cancer (sun) and Capricorn (Moon). A full moon is when the sun is opposite the moon and of course the tensions of Full Moons are legendary. Talk to an E.R. staff about what goes on in their world during a full moon and you’ll hear a lot of drama with or without George Clooney. Now with an eclipse, the full moon goes on steroids because the Lunar Nodes are over shadowed by the Sun. The drive to be responsible, to be mature, to be prudent are out gunned by the emotional, moody and fluctuating desires.

I won’t bog us down too much on the North and South Nodes but ever since August of 2009 when the North Node moved out of Aquarius and into Capricorn we have been striving to be more mature and sober. We went from “Kumbaya, whatever the group wants” to, “wait a minute what is MY responsibility?” In one fell swoop we all knew, deep inside of us it was time to be our own CEO, our own boss our own Father. We basically, all grew up and said, “I’ve got to be an adult.” Curiously, as we process out our own responsibilities we also are asking bigger questions about government. What is government’s role? Can it be managed? And who is working for whom? We will continue to work on this energy until March 2011 when the nodes change signs. But in the mean time the north Node in Capricorn will not be without its challenges and one of them is this Lunar Eclipse.


The Sun in Cancer wants to be fluid, it wants to be emotional it thinks all answers lie it its feelings. I am the first person to tell a friend, “What does your gut tell you?” But there is a difference between gut and feelings and if you don’t know the difference ---now would be the weekend to discern between the two of them. Feelings have both fear and hope in them, the gut is actually “a knowing”. Can you find it?


Additionally, with this lunar eclipse we have the Moon on Pluto. By itself this puts emphasis on power and how we access it or how we run from it. Of course both responses are reliant on character.

As we know the squares taking place this summer are focused on the cardinal points---and with this eclipse, the Sun & Mercury & South Node in Cancer opposes Pluto & Moon and North Node in Capricorn. Then over in Aries we have the conjunction between Uranus and Jupiter squaring Moon & Pluto and ----squaring Sun & Mercury. Uranus and Jupiter are demanding breakthroughs and rebellion and they will do it THEIR way. Because it is in the sign Aries the accent is on rash behavior. Not particularly thought out. Of course, the square aspect is not subtle. It will bring out a concrete hurdle and or crisis. Some of that tension will probably manifest through Mercury which puts emphasis on communication or ‘miscommunication’. Prepare for someone to say something that pisses off others, many will not be able to rise above calling the offender on their poor comment. Who will probably hide behind “Truth” but what we know is truth is really relative and those who are “just telling the truth or stating the ‘obvious’ may not be either. Because like beauty, truth is in the beholder. And since these cardinal energies are perhaps our most primal signs, the truth we all seek is not outside but inside. Meaning, a person can say what is truth or not but in every one of us, ‘our gut knows what is real.”

Expect some people to reach out way beyond their comfort zone as they deal with stuff. There may be real actions based on other reactions. Some of us will access the power of Pluto and take the elevator way, way down and shift things on their core. Great. Others will take the elevator and get depressed. Whatever path you take is fine as long as it is different. Remember, Uranus and Jupiter is demanding a new path.

At the same time Saturn is in the last degrees of Virgo so it is not yet there in the Libra the other cardinal sign but it is still in the mix of the square. The Sun is a wide Square to Saturn but Mercury is a much closer square. Again, emotions will feel pressured and our tongues could be sharp especially as we see the negative actions around us. And of course, Saturn is opposing Jupiter and Uranus. Father (Saturn) is angry at what he considers his mouthy son a rebel without a cause (Uranus). What he doesn’t know is that there is a cause; there is a root to the problem and the reason for the behavior. It doesn’t make it right but still there is something there. This weekend ask where can find discipline in my daily life? How is my diet? How are my structures holding up? Where are the holes in my system? Where are the fault zones? Where do I need to find a breakthrough? Where can I expand? Where can I find a place in the greater world? Where can we find family? What is my relationship with big business? Is it working? Is it not? Watch for power plays. Is it your boss? Is it your country? Is it the patriarch in your family or family of choice? What can I learn from it? How am I looking for power? Where are you trying to find it? What are you willing to do for it?


I take pause that the Global 20 are meeting this weekend. Sigh.


Fight the good fight and breathe.
Posted by Tracy at 10:50 AM