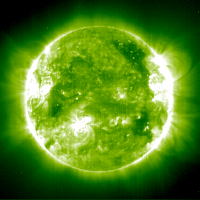 Over at her site, Lynn Hayes has posted an interesting angle on Jupiter & Uranus and how it is tied to more solar flares.

Solar scientists met last week to discuss the higher levels of solar activity that are likely as we move out of the Solar Minimum of the past few years. The head of NASA's Heliophysics Division says "our technological society has developed an unprecedented sensitivity to solar storms."


I have mentioned it a few times on this site that the solar maximum (the part of the sun with more spots) will be facing earth in and around 2012. Last month a satellite came crashing to Earth after a flare and wiped out cable in several states. Coincidentally, over at Huffington Post, there is posting about EMP which ties into a show on the NatGeo channel about EMP, Electrocmagnetic Pulse that I watched this week.

"In less than a billionth of a second, the electrical intensity on Earth's surface would become so hot that microchips would fry, power lines would overload and the electric grid would collapse," says National Geographic, describing . "Everything with microelectronics in it would stop: your car, your computer, the subway. There would be no electricity."

Learn more about what would happen if an EMP bomb were ever detonated in the video below, then find out more about solar flares.

While I had it on my husband was at his computer. Slowly as the information unfolded my husband turned from his emails and joined me in watching what would happen if either the sun's solar flares hit us with a huge gamma wave pulse or if Iran/North Korea set off a bomb. My husband and I immediately discussed what would be our plan to get out of the city. Bikes! By the way, cars won't work after an EMP because all the electronics will be useless. It is all about finding a place where you can grow food! Note to self---buy seeds! lordy.
Posted by Tracy at 5:58 AM