And Coincidentally-----Jupiter is big ass close 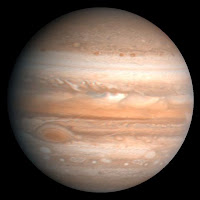 CAPE CANAVERAL, Fla. — Better catch Jupiter next week in the night sky. It won't be that big or bright again until 2022. Jupiter will pass 368 million miles from Earth late Monday, its closest approach since 1963. You can see it low in the east around dusk. Around midnight, it will be directly overhead. That's because Earth will be passing between Jupiter and the sun, into the wee hours of Tuesday.

The solar system's largest planet already appears as an incredibly bright star – three times brighter than the brightest star in the sky, Sirius. The only thing brighter in the night sky right now is our moon. Binoculars and telescopes will dramatically improve the view as Jupiter, along with its many moons, rises in the east as the sun sets.

"Jupiter is so bright right now, you don't need a sky map to find it," said Tony Phillips, a California astronomer under contract with NASA. "You just walk outside and see it. It's so eye-catching, there it is."

Phillips has never seen Jupiter so bright. "To an experienced observer, the difference is notable," he said Friday.

Coincidentally, Uranus also will make a close approach the same night. It will appear close to Jupiter but harder to see with the naked eye. Through a telescope, it will shine like an emerald-colored disk less than one degree from Jupiter.

Jupiter comes relatively close to Earth about every 12 years. In 1999, it passed slightly farther away. What's rare this time is Uranus making a close appearance at the same time, Phillips said. He called it "a once-in-a-lifetime event." While seen right next to Jupiter through a telescope, Uranus actually will be 1.7 billion miles from Earth on Monday night.

Phillips urges stargazers not to give up if it's cloudy Monday night. Jupiter will remain relatively close for many weeks, he noted, providing good viewing opportunities for some time. And for those who are early risers instead of night owls, Jupiter will be visible setting in the west just before sunrise.

Story continues below
Posted by Tracy at 5:39 PM