The thing that happened in Monaco 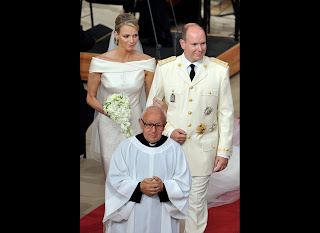 When did Henry Kissinger turn Catholic?


Prince Albert of Monaco married Charlene Wittsock of South Africa. A few dignitaries with nothing else to do showed up at his big, fat, Monte Carlo wedding which is suppose to cost 20 million Euros or something like that.

The interesting thing is that astrologers will not be drafting a wedding chart for Saturday's shindig since that is the religious service. A civil ceremony took place on Friday July 1 in the evening. I do not know the exact time but a chart drafted for 7:30pm Monaco time is pretty close to the eclipse. I can't for the life of me imagine a royal family as pop-y as the Grimaldi not having an court astrologer somewhere on their royal blackberries...but they must not. Because there is NO astrologer on God's green earth who would have signed off on a solar eclipse (and grand cross) of July 1, 2011 for a wedding date.

Albert is a Pisces and does get some boosts from the Cancer planets but still, I can't wrap my head around this date for their marriage. God knows there is a lot riding on it. Charlene is an Aquarius with Moon in Leo. That Leo is all good for the royal spotlight but the eclipse is right on her Mercury and my guess is that she has a lot to say but can't...and probably never will with this marriage chart.

However, she is beautiful and for that the country should be grateful. I predict child next year!
Posted by Tracy at 7:16 PM