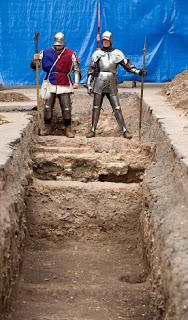 I have been following the story of Richard III for the last few weeks and have thought how perfectly Leo lunar phase!   And  not only is the subject royal which speaks to Leo the subject was also the subject of a play by arguably the worlds greatest playwrite  which of course also has Leo written all over it.   Of course what I think is most interesting is that there an actual descendant living in Canada....14th nephew of Richard III who they will check the blood and see if the DNA matches.  My moon in Cancer says, "Wow."

London --
Archaeologists searching for the grave of King Richard III say they have found bones that are consistent with the 15th century monarch's physical abnormality and of a man who died in battle.
A team from the University of Leicester said Wednesday the bones were beneath the site of the Grey Friars church in Leicester, central England, where contemporary accounts say Richard was buried following his death in the Battle of Bosworth Field in 1485.
Richard Buckley, co-director of the university's Archaeological Services, said the bones are a "prime candidate" to be Richard's. The remains are now being examined and the team hopes that DNA can be recovered to aid identification.
William Shakespeare, writing more than a century after Richard's death, described the king as "deform'd, unfinished," a monster with a deformed conscience who murdered his nephews in order to gain the throne.
The murder charge is a matter of historical dispute. The official royal website says the young princes "disappeared" while under Richard's protection.
Taylor said the skeleton displayed spinal abnormalities consistent with contemporary accounts of Richard's appearance.
"We believe that the individual would have had severe scoliosis, which is a form of spinal curvature," Taylor said.
He said the skeleton was apparently of an adult male and in good condition. There were signs of trauma to the skull shortly before death, perhaps from a bladed instrument, and a barbed metal arrowhead was found between vertebrae of the upper back.
Buckley and his team identified a possible location of the grave through map regression analysis, starting with a current map and analyzing earlier maps to discover what had changed and not changed. Ground penetrating radar was employed.