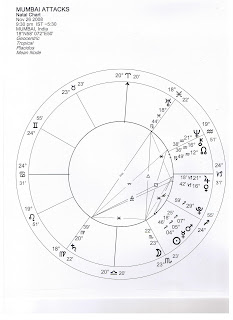 
Last week I was traveling and had very limited internet time and even less time to watch TV. When I learned of the attacks in Mumbai it was several hours after the event had transpired and I was a little fuzzy about the time difference between the US and India. But despite my fuzzy feeling I was struck by one thought, “Gee, it feels so Pluto in Sag, NOT Pluto in Cap.” I said that knowing Pluto moved into Capricorn on the 26th. However that is the 26th ….in the Americas. It was on the 27th for the rest of the world. So, that meant that the attack did occur while Pluto was still in Sag. From various reports it appears the gun men entered Cafe Leopold around 9:30pm local on the 26th. Drafting that chart we see Pluto was at 29 degrees 59 minutes Sag. Truly, it was the last minute (of arc) of Sag.

The Sag explains the International city, international crowd—many of them tourists. The targeting of Americans, British and Jews can be also be explained by the xenophobia which also goes hand in hand with racism and zealotry (more bad Sag stuff).

Added to this energy was the fact that the Moon was in Scorpio, which is dark and secretive and hides things well and in fact it took several days to learn who may be responsible for this gross event. As of this writing, it appears to be some fringe extreme Islamists from Pakistan. Which to me falls under the category, “Been there, done that---Pluto in Sag”. Sigh.

One thing that I did note with the chart (Placidus) is the Cancer Rising. The first attack occurred in a restaurant (food—Cancer) and there has been much emphasis on the Sandra Samuel, the nanny who protected and saved the little boy whose parents were murdered. The Cancerian need to protect clearly emphasized. Added to it, is the emphasis of FAMILY, which is colored by the Scorpio Moon in the 4th house. Moshe the child who lost his parents was flown to Israel where he attended a state funeral for his parents. During the funeral we learned that Moshe’s mom was pregnant. Again, more Cancerian energy. Sandra was also taken to Israel where she was recognized for her heroism and embraced by the whole country as 'family'. Which I am strangely reminded of Elian Gonzales who wound up on Florida shores and embraced many (certainly Florida) by family ( 1999--Pluto's mid trek in Sag).

Sadly, also killed in the event was Vedic Astrologer, Alan Sherr who was attending a spiritual conference by the Synchronicity Foundation. Adding more family into the mix and pain---his 13 year old daughter, Naomi was with him and also murdered.

When you look at the event and see Pluto in the 6th house, we can see the tie to Moshe’s parents who worked for Chabad House which serves a whole community. And then Uranus in Pisces in the 9th makes perfect sense for the spiritual retreat Alan and Naomi were attending.

What still is confusing to me is the motive for the event? I blame Moon Square Neptune. Which can explain why things are still unclear and also that the motives are most likely delusional. There is more to the chart but that is my first thoughts.
Posted by Tracy at 10:18 PM