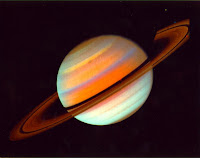 Today, Saturn which has been retrograde since late January is going to move out of Libra and trek backwards into Virgo. "Oh, boy, that again!" Here's the deal, we have been processing Saturn in Virgo issues for about two years and half year until late 2009 when we got a bit of a reprieve (if you can call it that) as Saturn moved out of Virgo and into Libra and immediately began beating up all our relationships. "How's that been going by the way?"

Now, today our relationships will get a bit of a break (sort of) as Saturn moves back into Virgo one more time where it will remain until late July. During this final round we should take full opportunity and work the energy as best as we can. This means, we are once again going to have to have a "come to jesus" moment about our schedules, our calendars, who we serve, who serves us, our hygiene, our health and most of all (in my mind at least) our time management! Also, how do we dot our i's and cross our t's. While Saturn was in Libra we were probably so busy putting out the fires in all our relationships (not just spouses but everyone whom we relate) that we were getting sloppy with all those Virgo traits. How's that diet? How's that weight? How's that calendar? How over committed have you been? And what stuff did you forget to do and how did it cost you? This is the shit that pisses Virgo off and Saturn is a stern taskmaster. Saturn knows he sometimes has to make us lose something to get our attention. Anyway, after these next three and half months we will not have Saturn in Virgo for 27 years. So, don't you think now would be the time to get your act together?

Also, on April 26, we will have the final pass of Saturn Oppose Uranus in the signs Virgo and Pisces. The next time these two go at it will be later in the summer when they are in Aries and Libra (Holy shit, watch the sparks fly with your 'realtionships then!") but for right now, we have got all this Uranus energy to be creative, dynamic and renegade in some vague Pisces, unknown, hard to qualify way. Basically, we are trying to break from ennui but can not put our finger on how to do it, while at the same time we know we need more daily structure and organization Saturn in Virgo. We long for a different calendar but don't know how to get there. Anyway, I am here to tell you, we will get there but like any birth, it will not be without a bitch of a push. Breathe!

And f course as every astrologer from here to Timbuktu has stated, this oppostion is the reason why we have been dealing with the Health Care Debate. Let's see what other drama comes up on this topic between April and July. It ain't over until the Fat Lady gets Insurance.
Posted by Tracy at 11:12 AM