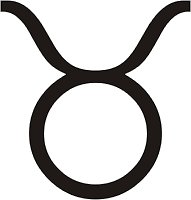 Take care that your lazy side doesn't grow too much or you get too stubborn. Watch what you dig in about and ask yourself ...is this really important?

Imagine the following:
You are on a boat tied to a pier outside San Francisco. The boat bow is heading Due SOUTH and it takes off, two months later it ends up in Tahiti. Now let's go back to that pier and the boat's bow is heading south but the captain sets the compass just two or three degrees SouthWest, you take off and three months later you end up in New Zealand.

This is what is happening to Taurus. They are getting tweaked, snipped, moved, shifted in ways both internally and externally but in the end they will end up some place completely different...and good. The reason for this change is Pluto. Pluto is the planet of change and transformations. And even though, Pluto is making a Trine which in astrology is a beneficial aspect (god, astrologers hate saying something is good or bad---but I'll do it anyway) there is always a bump for Taurus when they have to make a change. Tauruses like sameness and comfort in knowing something will be there tomorrow that was there yesterday. Even when it is a positive change they can get agitated, "What do you mean we are staying in the Four Seasons, I always stay in The Red Lion?!"

These birthdates are put on notice, you are shifting and changing with the help of the Universe and even though it makes you nervous, I encourage you to release your fear and go with the flow. It will be worth it, I promise!!!
Posted by Tracy at 7:22 AM