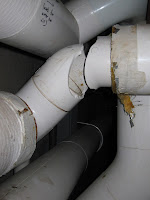 Yesterday around 2pm I had a moment with someone. The details of the moment are not important but what was notable was the feeling that hung around me. It felt murky, old, yucky, stuff from the past, an echo of an old wound so great that I felt helpless. This is not a position I find myself in often and raced home to check the moon. At 2pm PDT the moon was in conjunction with Pluto which is of course in square to Saturn. I love the eight phases of the moon and use them regularly in my life. Having said that I have gotten out of practice of utilizing daily lunar activity. I normally find it too overwhelming due to the speed which the moon moves.
However, checking back to July when the moon was in Capricorn I found myself once again dealing with all things Pluto. At that time I put the emphasis on Pluto but really when I think back on it, the wind in that sail was the moon's conjunction. It was that little 'push'. It was so stressful I took myself to a movie just to shift the energy. Unfortunately it was kind of a dark movie....lordy, I couldn't get a break.


Pluto is a plumber. He goes in deep and find the broken thing that needs to be fixed. Those deep buried memories or maybe even memories not so deep but still powerful---that is the territory of Pluto. A Moon in Capricorn is pretty darn practical which is interesting when dealing with something so profound as a miner or plumber going through your insides and finding some blockage. The moon is just pushing that plumber further down..'Go there, see if it there!" I felt like someone was saying, "Test her metal".

Next month, the Moon will be in Capricorn on September 15 (6:52pm PDT). I will be all over it like white on rice. No matter how yucky.
Posted by Tracy at 8:17 AM