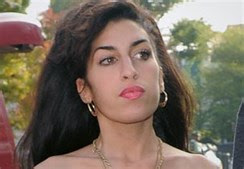 First things first, you cannot use astrology to predict death. So, let's not even go there. But we can still talk about Amy Winehouse's chart. I have not looked at her chart before this week but when I went to Astrothemes to find her birth data; September 14, 1983, they also indicate a time of birth of 10:25pm. How did they get that time? Was it a birth certificate? Did they ask her? I'm unclear.

Using the Astrotheme data Amy has a Zero Capricorn Moon. This is exactly why we need a time for charts (well actually for many reasons) but if she was born earlier than 10 at night she would have Moon in late Sag. Her Sun is at 21 Virgo and if she had a late Sag Moon it would most likely square her Sun. Sun square Moon creates tension and crisis but of course a jillion people have Moon square Sun without the drug and booze issues that were so pronounced in Ms Winehouse's life. Also, Sagittarius can suffer from too much exherburance, too much of too much. It can drink too much, eat too much, spend too much, pontificate too much, you get the idea. And even if her Moon was at Zero Capricorn, Zero is only Zero and there is a bleedthrough of the neighboring sign.

Adding fuel to this fire is the unquestionable square between Sun and Neptune. This is a very hard aspect. Neptune is addiction, booze and drugs, illusion, depression and loss. The square can hurt a great deal. However, as one gets older one learns how to work with a square to Neptune. It is highly creative, the muse speaks loudly through the square, it is also highly spiritual. Mysticism can excel as well as the power of prayer but it takes age and wisdom and when the native is still green, the square hurts.

Amy's Saturn in Scorpio conjunct Pluto in late Libra could make her an intense work horse. She could have worked throughout her life with good results. But also that Saturn conjunct Pluto speaks of her father. He must have been a tough, overwhelming presence and threatening. It would have been nice for Amy to have lived through her Saturn return so she could have gone through that necessary hard work (we all go through it between 27 -30) and on the other side she may have been liberated from her father and some of those daddy demons.

Amy's Mercury conjunct her Sun helps make her an excellent communicator. Problems or not she knew how to sing, clearly gifted and her fans responded to her voice. Mercury is all over that.

But let's go back to her birth time, assuming it is correct, her Gemini Rising is extremely nervous energy. Virgo which is her Sun is a very nervous energy. Mercury conjunct Sun (in Virgo) is a nervous energy. This is A LOT of nervousness. Getting grounded would be very challenging. And add to all this is her Neptune square Sun which has no ability to get grounded except through prayer (when they are over 40). I gotta say my guess is she may have had ADD-HD and had a very hard time being in her body. I wish she had been born later than 1983, had she been born in the 90's or now her family could have helped her with more options for add-hd than the options in the 1980's. If this indeed was an issue which I think the chart implies. And by the way, those drugs and booze choices probably started off in her life as simply self medication for all that nervous energy.

Anyway, I think there is a lot going on with this very talented young woman's chart. I just wished she lived longer.
Posted by Tracy at 5:24 PM