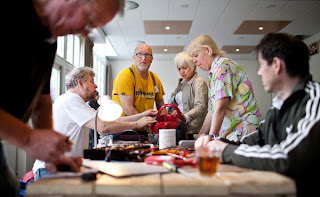 A special thank you to my friend Rev. Kac for sending me a fantastic article from yesterday's NY Times.   I'm so glad to see the NY Times put out this article during Taurus lunar cycle.  After all, working on something with your hands is so tangible and very Taurus.


The article is all about something wonderful going on in Amsterdam.  They are called "Repair Cafes" and they happen every few months in different locations.   People bring in items that need to be repaired and volunteers who like to fix things will fix them right there on the spot.    Either for free or nominal charge.

A person has something broken, a person has a skill that they enjoy doing and presto, something is working again and not in a land fill.    Is there anything that speaks more to Pluto in Capricorn?

Look at this comment and see if you can feel the Pluto.

That was certainly true for the woman who brought her 40-year-old vacuum, bought when she was a newlywed, to a Tuesday night Repair Cafe. “I am very glad, very glad,” she said as John Zuidema, 70, sawed off the vacuum’s broken nozzle. “My husband died, and there are all these little things around the house that he used to fix.”

It started about two and half years ago which was when we were building towards the cardinal climax.

Now here we are in the build up for Uranus Square Pluto and I say--- "We need more Repair Cafes!"  Bring them to the US.  Soon, please!

Here's the beginning of the article--go to link for full piece.

AMSTERDAM — An unemployed man, a retired pharmacist and an upholsterer took their stations, behind tables covered in red gingham. Screwdrivers and sewing machines stood at the ready. Coffee, tea and cookies circulated. Hilij Held, a neighbor, wheeled in a zebra-striped suitcase and extracted a well-used iron. “It doesn’t work anymore,” she said. “No steam.”

Ms. Held had come to the right place. At Amsterdam’s first Repair Cafe, an event originally held in a theater’s foyer, then in a rented room in a former hotel and now in a community center a couple of times a month, people can bring in whatever they want to have repaired, at no cost, by volunteers who just like to fix things.

Conceived of as a way to help people reduce waste, the Repair Cafe concept has taken off since its debut two and a half years ago. The Repair Cafe Foundation has raised about $525,000 through a grant from the Dutch government, support from foundations and small donations, all of which pay for staffing, marketing and even a Repair Cafe bus.

Thirty groups have started Repair Cafes across the Netherlands, where neighbors pool their skills and labor for a few hours a month to mend holey clothing and revivify old coffee makers, broken lamps, vacuum cleaners and toasters, as well as at least one electric organ, a washing machine and an orange juice press.

“In Europe, we throw out so many things,” said Martine Postma, a former journalist who came up with the concept after the birth of her second child led her to think more about the environment. “It’s a shame, because the things we throw away are usually not that broken. There are more and more people in the world, and we can’t keep handling things the way we do.
“I had the feeling I wanted to do something, not just write about it,” she said. But she was troubled by the question: “How do you try to do this as a normal person in your daily life?