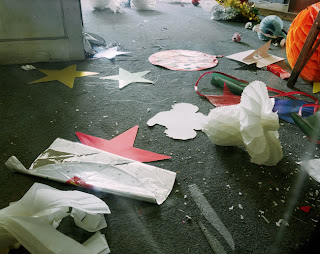 Today, Robin Gibb died.  The BeeGees may have not been my number one favorite musical group but it is difficult to imagine a party in the 1970's without their music playing in the background.  God knows I heard 'Staying Alive" about one trillion times.

Earlier this week,  Donna Summer the other predominate voice in the late 70's and early 80's died on Thursday.

As we know earlier in the month Adam Yauch  died and many a party rocked hard in the 80's and 90's thanks to MCA and Beastie Boys.  After all, they said it best, "You gotta fight for your right to party!"

I'm not sure what is going on here but it does feel like the party is over for several generations all within a couple of weeks.  I'm inclined to lean towards Neptune who is in Pisces.  Pisces rules music.   Neptune dissolves and is in square to North Node/in Sag (and South Node in Gemini).   And Sag can't open a door without throwing a party.  Ah, but Gemini is about change.     And that we are feeling.