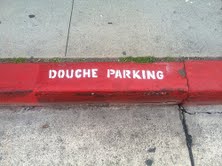 A very smart, clever and VERY funny comedy writer girlfriend of mine called me yesterday and said, "Are you following Adam effin' Carolla and his big fat ass opinions?"

I said, "No, I'm pretty busy I don't keep up with Adam effin' Carolla."

And so she gave me the update.   Here's the pertinent information:


The lesson you learned from a sexual harassment seminar was “Don’t hire chicks.” Do you hate working with women?

No. But they make you hire a certain number of chicks, and they’re always the least funny on the writing staff. The reason why you know more funny dudes than funny chicks is that dudes are funnier than chicks. If my daughter has a mediocre sense of humor, I’m just gonna tell her, “Be a staff writer for a sitcom. Because they’ll have to hire you, they can’t really fire you, and you don’t have to produce that much. It’ll be awesome.”
The “are women funny” debate has grown very contentious. You’re not worried about reactions to this?
I don’t care. When you’re picking a basketball team, you’ll take the brother over the guy with the yarmulke. Why? Because you’re playing the odds. When it comes to comedy, of course there’s Sarah Silverman, Tina Fey, Kathy Griffin — super-funny chicks. But if you’re playing the odds? No.
If Joy Behar or Sherri Shepherd was a dude, they’d be off TV. They’re not funny enough for dudes. What if Roseanne Barr was a dude? Think we’d know who she was? Honestly.


Well, let's forget that I am a woman and I spent a great deal of my adult life writing jokes for a living as well as several of my very funny girlfriends.  So, let's put all that aside and talk about Adam's chart.

His Sun is in mouthy Gemini which when it is unprocessed is shallow and reactionary.  We don't know his time of birth but his moon is most likely in late Sagittarius, again, mouthy and opinionated.   I can tell you that as signs go, Sag is funny and Gemini can be very funny.   Although like everything it is most important to know your audience and with Adam he clearly knows his audience.   I was stunned to hear that his podcasts are downloaded by hundreds of thousands of his fans since I thought in order to download stuff you needed opposable thumbs.


Obviously he was born on a full moon given the sun moon opposition and I thought this quote was very telling and spoke to that opposition:

I play with my kids [six-year-old twins Natalia and Santino] in the pool, I hug them, I dance with them. That’s not how my family is. I had two shows on basic cable for years, and my mom, at a birthday dinner, said to everyone at the table, “Can anyone give me one good reason why I should get cable?” She wasn’t trying to be a bad parent. She meant it.

Perhaps Adam's opinion that women aren't funny started with the first woman of note and has been down hill ever since.

And speaking of Roseanne Barr.  If Roseanne was a man he would have had a been hired on The Man Show, been given his own sitcom and hired a bunch of writers and none of them would have been Adam Carolla because he would have said, "That d'bag I wouldn't get cable for him".