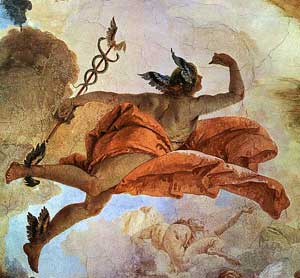 Robert Wilkinson is an astrologer with a terrific blog Aquarius Papers.  He has a really sharp pov and I like a lot of what he writes.  I thought I would share a little bit from his current post on the upcoming Mercury Retrograde.  Go to his link for the whole post.


Astrology in July and August 2012 - Will The Coming Mercury Retrograde in Leo Slow Things Down Like Venus and Saturn Did?

by Robert Wilkinson
Actually, the coming retrograde should prove to be a fairly productive time with many unique and favorable developments. What follows is why.

Now that Venus and Saturn are moving forward and the Jupiter square Neptune is finally leaving the stage, things should proceed with more precision and momentum than we've had in a while! It sure seemed like Venus retrograde slowed a lot down, as I explained in yesterday’s article.
Venus gave us a look at past and future developments as it danced back and forth between 8 and 24 Gemini. Now it’s moving across that span one more time. Now it’s moving forward, we’ll all be dealing with lessons connected to its stationary involving the stirring of unconscious factors that will repolarize our ego. Whether it’s a protest against privilege or just a catabolic meltdown will depend on our individual circumstances.

Saturn retrograde gives us yearly reviews of lessons we need to take a new look at. Now it resumes its trek through the end of Libra, so this is the time to what “philosophical completions” you’ve done since February. Still, it’s moving forward, so those affairs related to Saturn will as well.
Even though Mercury is slowing down, about to go RX at 13 Leo on July 14, 7:16 pm PDT, 3:16 am Greenwich on July 15, I suspect it will still be a fairly productive time given its relationship with both Venus, Mars, and Jupiter for most if not all of the RX period. Remember here that sextiles are productive, quintiles are specializing, and septiles indicate times when we are forced to make critical decisions.

Mercury is in tight sextile with Venus at the beginning of the period, retrogrades back.....

GO to LINK for rest of thoughtful article.