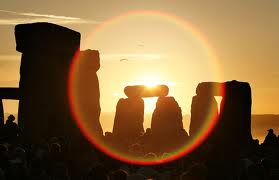 Solstice
Around 7:09pm EDT The Sun will be somewhere over the Pacific Ocean gently moving into the sign Cancer marking the beginning of Summer.   Of course for our friends in the Southern Hemisphere the Winter Solstice commences.   The longest day of sunlight will be celebrated in beaches, pools and blenders all over North America while the shortest day will no doubt be punctuated with hot toddies in New Zealand.

As much joy that summer brings to me personally, I have to say my soul responds more to the winter solstice probably because in the dark of the season, I am excited to know the days will be growing longer again.      But now I will get out the sunscreen and begin slathering.  I wish all of you up here with me in the nothern hemisphere a Happy Summer and to you down south a loving winter.

Here is a nice link to Lynn Hayes write up on the solstice.

by Lynn Hayes
image by Visual Alchemy. The Summer Solstice (northern hemisphere) occurs in the tropical zodiac at the exact moment when the Sun enters the sign of Cancer. This coincides with the longest day of the year and the most fertile season in agrarian cultures in the northern hemisphere. (Of course for my Aussie and Kiwi friends as well as those in southern Africa the seasons are reversed and the Summer Solstice occurs in December with the entry of the Sun into Capricorn. If you’re curious about astrology in the southern hemisphere, check out this article.)
Posted by Tracy at 8:30 AM