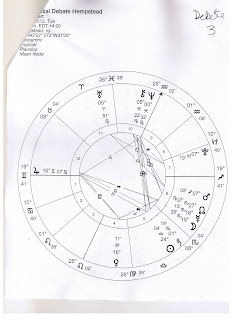 This is a much different affair than the first debate two weeks ago and last week’s Vice President debate.    Those debates had a lot of ‘fight’ in them.

The chart for tonight's debate is far less a ‘fighting chart’.

This chart has Sun in Libra, Moon in Scorpio and Gemini rising.   If this was a chart of a man or a woman, they would be one smooth operator.   Fighting?  Nope.  They are too clever and too cool to put on their dukes and fight it out.     This is a chart where we will see diplomacy and smiling and probably some hidden undercuts.

Interestingly the chart is perfect for tonight’s format.    This is a Town Hall format where the in house audience gets to ask the candidates questions.  This is not as likely an environment where candidate can be as strident as they were (or weren’t) in the other debates, because they are looking at JoeQPublic and answering their question not looking at the opponent.

Also tonight’s debate chart, has nice aspects with the Moon.  The Moon is the planet associated with the public and the debate chart has Moon Sextile Venus, Moon conjunct Mercury.   Honestly, with this aspect I wonder if it is a debate or a party?    Although, there is a quincunx between Moon and Jupiter which if I were consulting the candidates I would strongly suggest that they not reply to a personal question with a platitude answer.  It will fall flat with the public at home and may even ruffle feathers in the audience in the room.

With the Sun conjunct Saturn, if anyone has not done their homework, they will be busted.   But if they are all tuned up then then it could be a night of everyone looking like authorities ---- The candidates, the moderator and even the audience.    Not that it will be a staid night.   There will be sparks given Mars trine Uranus but with Uranus in the 11th house and Mars in the 6th, the sparks and energy will come either from the audience’s questions or Candy Crowley’s follow up.    Remember the 11th house is the house of groups of people and 6th house is the house of workers.  Technically, the number one worker in the room is Candy.      Of course the candidates themselves may step up and ‘work it’.

Venus square Jupiter is probably the biggest hurdle in the debate chart.  Venus in Virgo in the 4th house square Jupiter in Gemini in the 12th is challenging.   Venus rules money & values.   In Virgo in the 4th, both candidates had better be prepared to answer questions that speak to money issues specifically for the regular American, the guy at home.    “I’ve been unemployed for two years, what can you do for me?”   If either candidate pivots to a general economy answer it will fall flat.  How well do the candidates understand costs for Americans will be revealed.   Given it is a square, I’m not sure either will gain ground.   Additionally, a gay marriage question is highly likely with this aspect.   Especially since Venus is love and in this chart, Jupiter rules the 7th house of partnerships.      Of course, Venus connects to women issues.   And Jupiter in the 12th connects to religion.    Virgo speaks to health and workers.   Gemini speaks to synthesizing different opinions.   Both Virgo and Gemini are a nervous energy.     Additionally, Jupiter can speak to immigration.    With the square it could make it difficult for either candidate to make their point without looking like they are pandering or just give nervous answers.
If you want to see how the candidate’s chart’s compare with tonight’s event go to PoliticalAstrology.
Candy Crowley is a Capricorn with Moon in Scorpio.  She does have Jupiter sextile her Pluto which probably speaks to the large audience who may be seeing her for the first time.   She is in a slow build of Uranus square Sun (exact in November) which may push her to break free of some rules but Saturn conjunct her south node in Scorpio which makes me think she will reign back any renegade energy.
I'm walking away from this debate chart sensing a draw for everyone.

ETA:   Well, here we are two days out from the debate and we're still talking about "Binders of Women"  and Candy Crowley fact checking Romney.     Like I said, That Venus Square Jupiter was the bitch aspect in the chart.  And I think issues that are still being discussed speak to that aspect.  Together we say, "gawd yes."