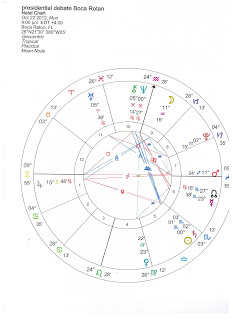 
Sun in Scorpio,  Gemini ASC and of course Jupiter is in the 1st house opposite Mars in the 7th.      The Moon in Aquarius in the 9th house trines Jupiter and sextile Mars.  The Sun trines Neptune and Sun conjuncts Saturn (last week’s debate the Sun conjunct Saturn as well).


I need to be honest and say that I am a bit confused by this chart.   The topic of the debate is foreign policy which is amply supported by the Moon in the 9th house.  Accent on things that are ‘foreign’ is also supported by Jupiter in the 1st.   Mars in Sag is a spiritual warrior, a true Crusader.  In addition to religion, Sag is also visionary.   Where are our wars taking us?  What is the purpose of our wars?   What is the bigger picture?   These are questions worth pondering under these aspects.  Especially, with the Moon in Aquarius making favorable aspects to both Mars and Jupiter.   Curiously, the last time Mars and Jupiter were opposite in these signs was in the hot summer of 2001.    It is interesting that here we are, eleven years later debating the wars that were activated late that summer.


The pressure of Mars and Jupiter has been throughout all these debates.   Now would be a good time to remind everyone about Jupiter’s righteousness.    He is THE planet of righteous (Next to Saturn) and god knows politics has been loaded with righteous indignation since before Caesar walked on Earth. We should expect once again a ton of ‘how dare you’ in posturing and tone even if it is not said.


So, if so much of this debate chart supports the topic of the night, then why am I confused?   I am confused because I have a hard time believing the topic will stay on Foreign Policy.  I don’t think either candidate has the ability to stay on topic for 90 full minutes.    If history is telling, it would seem Romney will try to move the topic to the economy and Obama will try to move it to social issues.   Since driving the subject to their favorite topics would theoretically give each candidate more quivers to shoot.     But if they stay on topic especially with such supportive aspects they will curry favor with viewers.   If they shoe horn their own topics they may get blow back.


Perhaps the tension provided by the Mars opposition Jupiter will be on Bob Schieffer keeping them on topic?  He is a Pisces who has Moon in Virgo so staying on track can be difficult.   Schieffer is experiencing a Jupiter Trine Mercury which is great for communicating.   Additionally, he has transiting Pluto trine Uranus which is very significant for the person moderating the last debate between the two men vying to be the most powerful man on earth.    He does have a wonky aspect with Saturn in a waning semi square with his Uranus.   This is a dulling aspect and a bit sobering.   In addition the debate chart with the Sun/Saturn conjunction could manifest with him trying to maintain control with a cold tone.   Of course, with Sun/Saturn, there are no short cuts, it is all about whoever has done their homework will rise to the occasion, if anyone has not done it, they pay price.


What is most helpful to this whole debate chart is the fact that in the United States chart, the USA has Moon in Aquarius and on this debate the Moon is also in Aquarius making nice aspects with Mars and Jupiter.  There will be at least one or two things said on that stage by one of the three people that will relate to everyone in America.