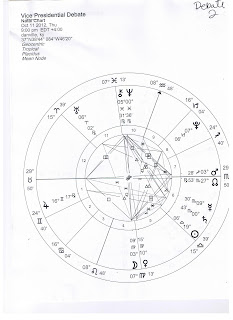 This week the 2nd Presidential Debate is scheduled to take place on October 11, 2012 at 9pm EDT in Danville KY and this time it will be the Vice Presidents in the center ring.

First of all we know that both Joe Biden and Paul Ryan are scrappers.   Pundits are pretty confident that both of them are going to come into event like prize fighters entering the ring.   Fists up.


(Note time is probably a guestimate by Biden).

For a read on each candidate’s chart and how it plays against the chart of the debate go to Political Astrology.

Above you will see I have posted my own chart for this week’s debate.   Looking at transiting charts I see some interesting things.

I don’t need to tell you that this debate will be different from from what happened in Colorado.


First of all, Biden and Ryan are different animals than their elevated partners.   No shit.    But more interesting to me is that the debate in Colorado in Mountain Time Zone gave the debate chart Aries rising, which was begging for a fight.   Don’t believe me?  Do you not have any Aries in your life?   The thing Aries energy likes more than anything is someone telling them NO so they can fight through it.    Also begging for a fight was Moon in Taurus oppose Mars  in Scorpio.     I have done plenty of charts of people with Moon oppose Mars and  here is their to do list:   Wake up, shower, get in fight, drink coffee, get in new fight, drive to work , get in fight and well you get the picture.


Obviously, no one told Mr. Obama that the chart was begging for a fight.  Which was to his detriment.    What was also interesting is that Jupiter in Gemini was in the 3rd house and clearly reflected by the huge  60 million viewers who tuned in.  And of course the next day all 60 million of them were political pundits giving their arm chair analysis of the event.  And they all judged it correctly.


With the Danville debate chart we will be revisiting the fighting environment:


Mars in the 7th house will clearly show that these men are fighting for their partner (7th) house and are going to tell America the truth (Sag Mars).  Emotions will be HIGH.


Everyone will be on their game.  Even if they are not on their game they are on their game.  Communication will be coming out of this event that will speak to everyone.  And I don’t know why I bother saying this but Mercury is squaring the MC so, yes, it will be as partisan as one could expect no matter how lofty they try to appear.


Moon conjunct Venus softens some of the rhetoric.  My guess is that both men will bring the human element to the debate.    There will be a plethora of anecdotes of real life Americans who are experiencing this issue and that issue.  “Mary in Cleveland told me…” ,  “Bob in Virginia Beach told me…”


Moon is on waning Trine with Saturn but still in effect so the details will undoubtedly be there.  And if any candidate does not provide facts and details the absence will be noted (greatly).  I actually think there might be too many facts given given all the sixth house planets.


And Moon is in trine to Pluto (applying) so depth, depth, depth is desired.   Whoever plays the depth hand or at least is perceived as playing that hand will score big points.


I think it is interesting that in this chart Jupiter will be in the first house versus the 3rd house(last debate).   Everyone and their brother know that amount of viewers will be less than the first debate (that’s just how it goes historically) but curious this debate is focused on Foreign Affairs which of course speaks to Jupiter.   Jupiter is in Trine to Sun so this is a debate worth having and all are interested in it.    And it goes without saying exaggerations will be a plenty with Jupiter in the first.   How much they exaggerate will be talk of the pundits for days.


Going back to the Moon for a minute.   Moon will be squaring Mars, conjunct Venus, trine Pluto and trine Saturn.


In the debate chart the moon rules the 3rd house of communication and when I look at all this pronounced Moon stuff I cannot help but think that this puts the light on Martha Raddatz the moderator.
Moon is a female planet and typically we think of it as ‘mother’.  Moon in Virgo is a critical Mom.     Moon in Virgo square Mars in Sag is an opinionated critical mom.     I think Martha  is going to be wildly in charge of this debate and will hold both candidates feet to the fire.    I would be blown away if she sits back and doesn’t bust either one of them on any hyperbole.     She is also a seasoned foreign affairs reporter and has spent more of her life in warring countries than either candidate.   My guess is she won’t be shy to remind them (Remember that Jupiter in the 1st house) of her background.   And since Saturn and Venus are favorably aspecting the Moon along with Pluto trine Moon--I can’t help but think the audience  will be supporting her.    Maybe she is the participant playing the depth card?


Surprise, surprise, Martha is an Aquarian with Moon in either late Aquarius or early Pisces (we don’t know her time of birth).   My guess is that she is probably something like 29 Aquarius or early Pisces and will be getting an opposition from the Moon in Virgo.     She also has Uranus (building) in conjunction with her Mars right now.   This is a once in a lifetime aspect but in Martha’s case it went over her Mars in April, it goes over it again the week of the election and then it goes over it again around the inauguration in January.  Clearly this debate has gravitas in her chart and her future.    And maybe the country’s future?   Pluto and  Chiron are also aspecting her moon but since we don’t know her time of birth we can’t say for sure what is the dates of those aspects.


The chart for the Democratic Party which you can find here:


Saturn continues to oppose Venus.  The first hit was on October 3 and the second hit is on October 11.   Okay, back in August I thought this was about women and or money.    But at that point I was not following the dates of the debates.   Had I know that the first hit was the first debate and the second hit was the second debate I would have connected the dots between Saturn/Venus and the debates.   Just for sport I think I will put up the solar fire description of Saturn oppose Venus and you do the math:


This is a time of great tension in your relationship with your partner, usually prompted by changes in your partner's attitude or life circumstances. Your partner may be demanding that you change past behaviour or old habits. Although this may be difficult for you to cope with, you would be wise to consider your relationship seriously and wait patiently for the basic truth of the partnership to emerge. If the relationship has become merely an outer shell with no substance it may well break down. However, if it is a good relationship the love will emerge once the superfluous relationship patterns have been discarded.


When we look at the Republican Party Chart which you can find here http://tracyastrosalon.blogspot.com/2012/08/approaching-conventions.html


we see a beautiful aspect by Uranus which rules TV and it is a (building) beautiful sextile with Venus that started during the last debate and will continue to build all month to October 28.    The good showing by Romney at the last debate plays into this aspect.    Will it be enough to ride over Saturn conjunct Pluto of the party chart exact on election day?   I am inclined to think not.


Finally, looking at the chart of the United States (Sibley)


Uranus has been squaring the USA’s Jupiter all year.  It was exact on April 19 and will be exact again on October 14 and finally one more time on February 18, 2013.   The last time this occurred was between May 1928 and March 1929.   Who will be our new Amelia Earhart or Mickey Mouse?    Does this have any bearing on the debates?   I’m not sure but I do know that Herbert Hoover got elected during the last one.  Google Hoover and learn more.


Also in the USA chart we have transiting Jupiter trine natal Saturn coming into focus near the last debate and exact the week of the election and again next April.     And we have the pair doing a similar nice tango when this time it is Saturn trines natal Jupiter on November 24,  May 31 and August 14 2013.   I think this could be good economy business news.  New opportunities are certainly highlighted.   Also supporting the economy even further is Saturn trine Venus Exact on October 31st.    This aspect also will be in effect big time on the last debate and definitely will be a factor at the time of the election.
Lots to ponder after the fireworks in Danville KY.
Posted by Tracy at 11:59 AM