And of course Neptune/Chiron in Pisces speaks of all things Pope-ish.  As the Pope wraps up his job I went looking for his birth chart and found a fabulous write up on Benedict at Astrology Weekly by Amy A.W. Bonaccorso. 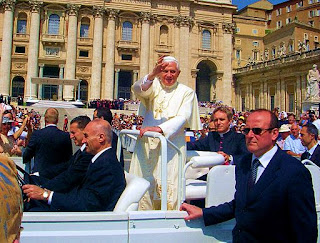 The minute the news broke about Pope Benedict XVI’s resignation, I immediately checked his chart. Benedict is an Aries, and his aggressive Sun sign is the perfect match for his nickname, “God’s Rottweiler.” He was born on April 16, 1927 in Marktl, Germany at 4:15 a.m.[1] I will primarily use the Whole Sign housing system for this interpretation, though much of it is also valid using the Placidius housing system.
Benedict’s chart immediately tells the astrologer that he is inclined to be both spiritual and religious. Benevolent and righteous Jupiter (Pisces, 20 degrees) is nicely conjunct his Pisces Ascendant, and kept company by Mercury (28 degrees, Pisces). While Pisces and Neptune are known for mysticism, intuition, and spirituality, Jupiter denotes organized religion as well as ethics, morality, and justice. The combination of Jupiter and Mercury in Pisces suggest both publishing and day-to-day communication about spiritual matters. Jupiter so close to the Ascendant is recognized as a placement of overall good fortune and optimism. The Jupiter/Ascendant native seems to benefit from special blessings every day! His Sagittarius Midheaven echoes Jupiter, and confirms career possibilities in religion, higher education, publishing, and international travel.
When Benedict resigned, Uranus in Aries (6 degrees) was trine his Saturn in Sagittarius (6 degrees). Saturn is located in the 10th house according to the Whole Sign housing system, and the 9th house according to the Placidius housing system.

The personalities of both Uranus and Saturn are reflected in Benedict’s resignation. Unconventional Uranus brings sudden, unexpected surprises that are hard or impossible to prepare for. Uranus in the independent sign of Aries impatiently demands action and authenticity. It challenges us to walk our own spiritual journey, regardless of tradition or what others may think of us. The unusual tidal waves that Uranus brings are affecting all Aries babies in particular right now, pushing them outside their comfort zones and challenging them to walk their own path. This sensation will also be felt by those with planets in Aries or signs that make contact with Uranus as it travels along its path.

Saturn is the planet of career, public life, fatherhood (the “Holy Father”), restrictions, and old age. Hence, the Uranian changes are occurring in these areas of his life. When Saturn is interpreted as lord of his 10th house, this is even more poignant. Modern astrology interprets this as the house of all things Saturn, plus fatherhood again (though I have heard that in Medieval astrology, it is associated with motherhood). Either way, it represents a critical parenting function, which the Pontiff fulfills in his role to Catholics around the world.

News reports confirm that he initially decided to resign in March 2012.[2] At that time, Uranus was approaching the trine with Saturn for the first time, which occurred in April 2012. The second hit in February 2013 prompted the announcement, and may also be the reason for the timing of the actual resignation, which will occur in March 2013. In his mind, it could be the one year anniversary of his decision, coincide with Lenten and Easter themes of sacrifice and resurrection, and also springtime themes of new birth, which Aries represents.

Further, his 10th house/Saturn are both in Sagittarius, the sign associated with religion, morality and ethics, travel, academia, and publishing. The Associated Press reported on February 11, 2013 that Benedict’s doctor had recently advised him against (Saturn=restrictions, old age) transatlantic travel (Sagittarius/10th house).[3]
The Uranus trine Saturn transit reflects a sudden change in his public status (religious office) that could seriously buck tradition and shock the public (Uranus = modern, unconventional rebel). Yet the trine means that Benedict probably decided harmoniously, which is reflected in the tone of his resignation speech. Reporters, bloggers, and Church insiders have remarked about his humility. This is a man at peace with his decision. And to a Christian astrologer who sees elements of God’s Will mirrored in the stars, it certainly seems that Benedict discerned thoroughly and is walking in the direction he is divinely called to.
Some people want a scandal, but I contend that the presence of a trine and the symbolism of this transit indicate a natural transition that reflects courage, sincerity, and a sober assessment of the changes and restrictions that advanced age brings.
Interestingly, Benedict cited how the modern world requires a lot of a pope, and Uranus rules modernism and technology. Forward-thinking Uranus, with iPad in hand, seems to be telling mature Saturn, “You know, you are too old for this job.” Saturn is nodding in acceptance, and dutifully stepping down from the throne.
Saturn is also sometimes depicted as the old hermit. It’s not surprising, therefore, that Benedict says he is retiring to a life of prayer, where he will be “hidden to the world.”[4] While Saturn can be the trailblazer and aggressive careerist in younger years, he can also be the cool and collected realist who has “been there and done that” in later years. Saturn transits are behind vocational choices, midlife crises, and important sacrifices or austerity measures.

Go to LINK for the rest of the article.